Fender instruments gives the public its first look at its recreation. 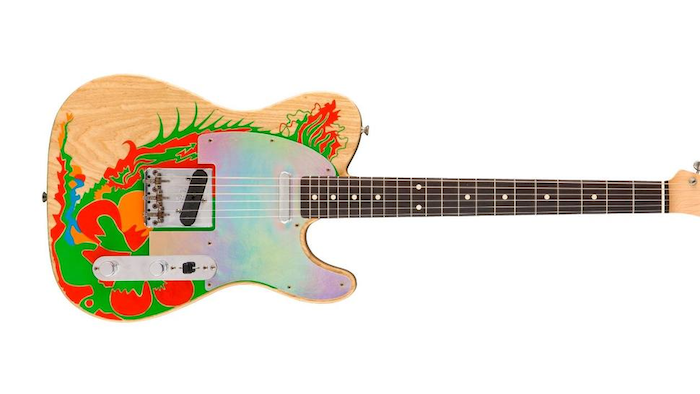 This image released by Fender shows a recreation of a Telecaster guitar that Jimmy Page once painted with a dragon, a long-lost piece of six-string history that marked the guitar hero’s last days in the Yardbirds and first days in Led Zeppelin. Fender craftsman Paul Waller, who worked with Page to reboot the dragon, says it represents “a pivotal moment for the guitar and for music.”
Fender via AP

Fender instruments on Wednesday gave the public its first look at its recreation of a Telecaster guitar that Page once painted with a dragon, a long-lost piece of six-string history that marked the guitar hero's last days in the Yardbirds and first days in Led Zeppelin.

The instrument with the psychedelic green-and-red serpent on its body represents "a pivotal moment for the guitar and music," said Paul Waller, the master builder who worked side-by-side with Page to make him a spot-on match of the guitar before making 50 more by hand to sell to the public.

The reboot was hatched when Page was looking through photographs for a book celebrating last year's 50th anniversary of Led Zeppelin. The dragon guitar, which he says was once his "Excalibur," kept popping up in them, and he started to think it was time to get past his bitterness about its fate.

The 1959 Telecaster, pre-paint, had been a cherished gift from his fellow former Yardbird bandmate Jeff Beck.

"It was given to me with so much affection," Page told The Associated Press in October. "I really wanted to customize the instrument, almost consecrate the instrument."

Page first decorated it with mirrors, then pulled out poster paints and used his art-school skills to summon the dragon.

He would use the guitar to write and record songs like "Dazed and Confused" for the first Led Zeppelin album, work as significant as any in the history of the electric guitar.

But a clueless house-sitter, not thinking much of Page's painting, put his own mosaic artwork over the dragon and presented it to Page as a gift. Page said it was all he could do not to hit the guy over the head with it. Instead, he stripped it bare and angrily threw it into storage, where it sat for 50 years.

The guitar-makers at Fender had thought about remaking the instrument long before Page himself came forward, because of its historic significance and as a way to claim for Fender a piece of Page, who among guitar nerds is associated with rival Gibson guitars.

"A lot of people were surprised to hear all of Led Zeppelin One was recorded on a Telecaster, that's kind of mind-blowing," said Waller, who has been building guitars since high school woodshop and whose creations have included a Telecaster for Keith Richards and a fully functioning Stratocaster made of cardboard.

Page wanted to recreate not just the design, but the form, feel and sound of the original, so Waller went to his house in London and the two took out the old guitar and took it apart piece-by-piece so they could recreate each part for the rebuild.

Page even made a trip to Fender's California plant — the rocker's first time inside a guitar factory — to inspect and help with the finished products.

"All the employees lost their minds," Waller said with a laugh, "to watch somebody like Jimmy Page be totally enthralled with the machinery and act like a kid and be taking pictures."

The 75-year-old Page painted at least a stroke on each of the 50 instruments Waller built.

"He was adamant about applying paint to every one," Waller said.

Fender is also selling assembly-line models of the guitar that are more affordable than the many thousands the handmade ones are likely to bring in.

Waller said he had been a bundle of nerves when the first of the recreations was sent to Page in England, and was deeply relieved when he heard back from Page that it was a dead ringer for his original.

"As soon as he opened the case he knew," Waller said.

Page agreed, telling the AP that "If anything, the colors were just slightly richer."