The company has wrestled with debt for years. 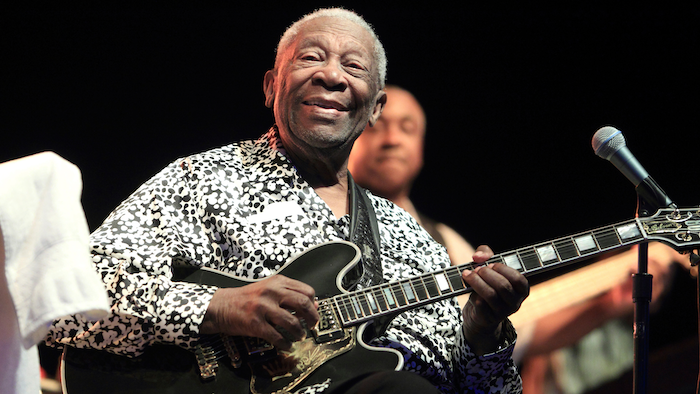 In this Aug. 8, 2013, file photo, Blues music legend B.B. King performs on Frampton's Guitar Circus 2013 Tour at Pier Six Pavilion, in Baltimore. The maker of the Gibson guitar, omnipresent for decades on the American music stage, is filing for bankruptcy protection after wrestling for years with debt. A pre-negotiated reorganization plan filed Tuesday, May 1, 2018, will allow Gibson Brands Inc. to continue operations with $135 million in financing from lenders.
Owen Sweeney/Invision/AP, File

NASHVILLE, Tenn. (AP) — Gibson guitars have been such a fixture in music history that Chuck Berry was laid to rest with his, B.B. King affectionately named his "Lucille," and Eric Clapton borrowed one from George Harrison to play the solo on the Beatles' "While My Guitar Gently Weeps."

The maker of the iconic instrument, a constant across generations of American music, filed for bankruptcy protection Tuesday after wrestling for years with debt. The decision came with an assurance from Gibson that it is refocusing on its specialty, musical instruments, and moving away from its debt-plagued push to sell home electronics.

In the hands of musicians from Jimmy Page to Duane Allman and Slash, Gibson's electric guitars have been a foundational element of blues and rock.

Legendary jazz guitar player Charlie Christian made history playing a Gibson ES-150 — one of the first ever electric guitars — through an amplifier with the Benny Goodman orchestra. The later big-bodied Gibson jazz guitars have been in the arsenal of many great players since then, such as Wes Montgomery and Joe Pass.

"It's hard to name any guitar players who play electric or steel-string acoustics who don't own a Gibson," said George Gruhn of Gruhn Guitars, a world-famous vintage instrument store in Nashville.

One of the only known photographs of iconic Delta blues pioneer Robert Johnson shows him with a Gibson L-1 guitar.

And the folk revival of the 1950s and 1960s wouldn't have sounded quite so mellow without battalions of steel-string Gibson acoustic guitars among the Martins and Guilds.

Elvis Presley didn't start out with a Gibson but he went on to own and play many of them, according to the website for Graceland, his Memphis home.

And Jimmy Page, the legendary guitarist for blues rockers Led Zeppelin, was and remains a longtime Gibson loyalist. David Bowie favored the 1989 Gibson L4 when he fronted Tin Machine. Slash swears by them.

Gibson, founded in 1894 and based in Nashville, Tennessee, has the top market share in premium electric guitars. It sells more than 170,000 guitars a year in more than 80 countries, including more than 40 percent of all electric guitars that cost more than $2,000, according to a bankruptcy filing.

The pre-negotiated reorganization plan filed Tuesday will allow Gibson Brands Inc. to continue operations with $135 million in financing from lenders.

Gibson has already sold off some noncore brands, acquisitions that contributed to its burdensome debt load. Gibson has begun the liquidation process for its struggling international Gibson Innovations division, which sells headphones, speakers, accessories and other electronics.

"The decision to re-focus on our core business, musical instruments, combined with the significant support from our noteholders, we believe will assure the company's long-term stability and financial health," Henry Juszkiewicz, Gibson chairman and CEO, said in a news release.

Gruhn, an expert on guitars of all kinds, said the company's bankruptcy was predictable after it expanded into the home electronics business. But he noted that doesn't mean the Gibson brand will simply fade away.

"The brand name and company's reputation for making guitars is tarnished, but not dead by any means, and it's very much capable of being resuscitated," Gruhn said.