A dispute has been escalating over airplane industry subsidies the EU says are hurting Airbus. 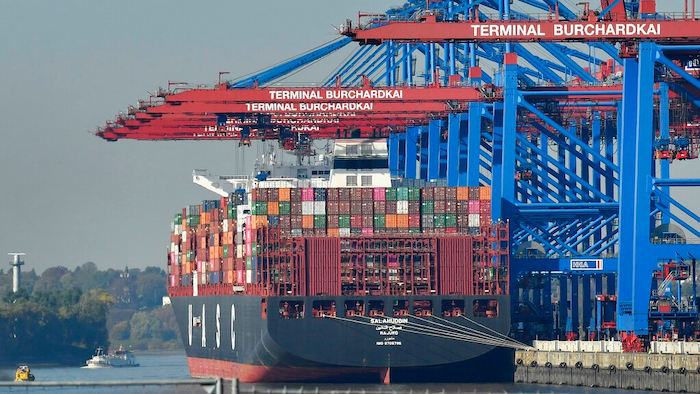 In this Monday, Oct. 15, 2018 file photo, a container ship is loaded at the harbor in Hamburg, Germany. The United States is considering putting tariffs on $11 billion in EU goods per year to offset what it says are unfair European subsidies for planemaker Airbus. While the size of the potential tariffs is relatively small compared with the hundreds of billions of goods the U.S. and China are taxing in their trade war, it suggests a breakdown in talks with the EU over trade.
AP Photo/Martin Meissner, file

BRUSSELS (AP) — The European Union has drawn up a list of $20 billion worth of U.S. products it could tax in an escalating feud over plane industry subsidies, the EU's executive commission said Wednesday.

The commission said the EU could tax the products , which range from aircraft parts to frozen fish, from early next year in retaliation for U.S. financial support to Boeing that it says hurt Europe's Airbus.

The extent of the EU punitive duties will depend on a ruling by the World Trade Organization. Earlier in this dispute, the EU sought permission to target $12 billion worth of U.S. products. Businesses and stakeholders have through May to give feedback on the proposed EU tariffs.

The move comes days after the U.S. said it was preparing tariffs on $11 billion worth of EU traded goods to offset EU subsidies for Airbus that hurt Boeing. That list of hundreds of goods includes European planes, wines, cheeses and olive oil.

EU Trade Commissioner Cecilia Malmstrom said the EU wants to avoid "tit-for-tat" action in the long-running dispute and that the world's biggest trading bloc "remains open for discussions with the U.S., provided these are without preconditions and aim at a fair outcome."

The EU list was made public after the WTO's dispute body confirmed on April 11 that the U.S. had not taken appropriate action to comply with subsidy rules. EU officials conceded that it's likely that the duties would amount to significantly less than $20 billion.

The EU responded with tariffs on about 2.8 billion euros' worth ($3.4 billion) of U.S. steel, agricultural and other products, from Harley Davidson bikes to orange juice.

The U.S. and EU have since July been negotiating how to scale back the tariffs, with Trump holding out the bigger threat of slapping tariffs on European cars — a huge industry in the region — should the negotiations not yield a result.