In addition to the JetBlue A321 delivered yesterday, there are currently nine other A320 Family aircraft in production at the facility. 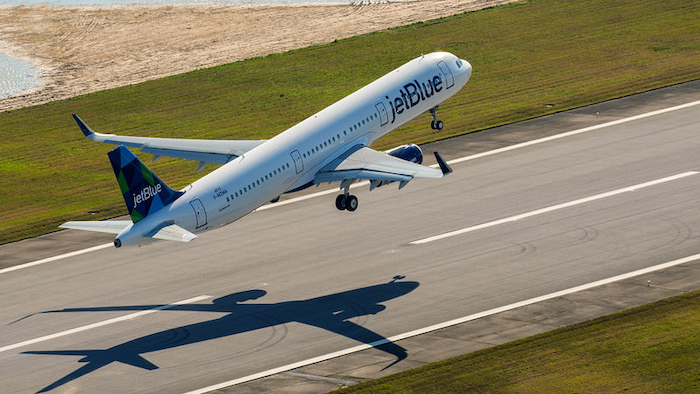 Airbus delivers its first aircraft produced in the USA. JetBlue receives A321 from Airbus team in Mobile, Alabama.
James Darcy/Airbus

The first ever delivery of an aircraft from the Airbus U.S. Manufacturing Facility took place yesterday, April 25th, in Mobile, Alabama.

The entire team of employees from the American assembly line gathered to present their very first completed product, an Airbus A321, to JetBlue.

On hand for the occasion were executives from Airbus, JetBlue senior management, including President and CEO Robin Hayes, and a broad collection of dignitaries from the Gulf Coast region.

“I am immensely proud to be here to participate in this first delivery from Mobile,” said John Leahy, Airbus Chief Operating Officer – Customers. “Going from breaking ground on this facility three years ago to handing over the first Alabama-produced A321 today is an amazing accomplishment. It’s a testament to how well executed this project was and how strong the teamwork has been here in Mobile and throughout Airbus. The Airbus U.S. Manufacturing Facility has brought together all the best aspects of our other assembly lines around the world, and it shows how Airbus people work hand in hand with our partners to deliver great aircraft to our customers.”

Airbus announced its commitment to build a single-aisle assembly line in Mobile, Alabama in 2012, and less than one year later, broke ground on the $600 million facility. The ceremonial inauguration of the plant came in September 2015. The aircraft delivered yesterday, a JetBlue A321, successfully had its first flight on March 21st, 2016.

In addition to the JetBlue A321, there are currently nine other A320 Family aircraft in production at the facility. Airbus anticipates delivering four aircraft per month from the Mobile plant by the end of 2017.

The initial deliveries will all be A320 Family aircraft with the Current Engine Option (CEO), but will begin transitioning to New Engine Option (NEO) derivatives in late 2017.

In addition to hundreds of new Airbus jobs the project has brought to the local community, the Mobile area has seen many Airbus suppliers open new facilities in the region, providing even more employment and a parallel boost to the local economy. Airbus is proud to boast that 87 percent of its new employees are from the Gulf Coast region, with nearly one third being U.S. military veterans.

Demonstrating the adage “The Sun Never Sets on Airbus” – Airbus aircraft are now produced around the clock, 24 hours a day, at facilities in: Mobile, Alabama; Hamburg, Germany; Toulouse, France; and Tianjin, China.