Puzder also has talked about replacing American workers who demand higher wages with robots, which he said are always polite, never late, and don't sue their employers for discrimination. 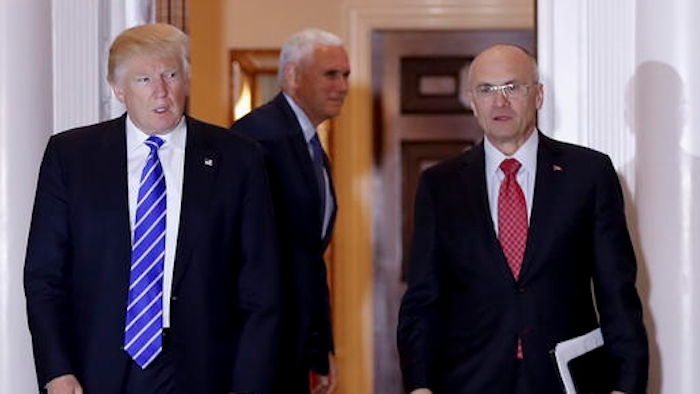 WASHINGTON (AP) — The fast-food empire run by President Donald Trump's pick for Labor secretary outsourced its technology department to the Philippines, a move that runs counter to Trump's mantra to keep jobs in the United States

A filing with the Department of Labor and Trump's criticism of outsourcing could be raised at Andrew Puzder's confirmation hearing, with Democrats questioning how well he can advocate for workers.

Puzder's company, CKE Restaurants Inc., notified the government in August of 2010 that it was outsourcing its restaurant information technology division to the Philippines. Doing so, the agency found, "contributed importantly" to the layoffs of both CKE employees and those of an outside staffing firm at an Anaheim, California facility. The agency's finding made workers eligible for federally funded benefits meant to dampen the impact of globalization on employees.

"By outsourcing the function to a firm that employs hundreds of Help Desk specialists, CKE was able to improve the quality of service levels to their restaurants," the company said in a statement Wednesday to The Associated Press.

There's nothing illegal, or even uncommon, about CKE's decision to move its help desk overseas and lay off about 20 workers. But the filing — and a spokesman's acknowledgement that CKE continues to use the IT operation in the Philippines — provides a window into a key contradiction raised by Trump's nomination of Puzder to head the Cabinet agency charged with enforcing worker rights.

"President Trump has said that he will put American workers first, but it increasingly appears this was just empty campaign rhetoric_and we saw this so clearly in who he nominated to lead the Department of Labor," said Sen. Patty Murray of Washington, the senior Democrat on the committee that will consider Puzder's nomination. "This filing showing jobs being outsourced overseas is yet another troubling example of workers being squeezed by companies under Andrew Puzder's leadership."

During his first week in the White House, Trump warned that he would impose a "substantial border tax" on companies that move their manufacturing out of the United States. He also promised tax advantages to companies that produce products domestically.

"All you have to do is stay," he said during a meeting in the White House's Roosevelt Room. Trump's companies have regularly outsourced supply purchases and sometimes used guest workers.

Trump's anti-outsourcing message, begun during the presidential campaign, is based on the idea that the practice has hurt middle and lower-income working Americans who feel left behind in the nation's economic recovery and form much of the new president's political base.

In its statement, CKE defended its decision to move its IT division overseas. "The existing CKE restaurant support staff was insufficient to adequately cover the disproportionately high volume of help desk calls that occur during the early morning hours and to provide full, 24-hours per day, 7-days per week coverage. So, CKE shifted its small help desk services team to a firm that provides both offshore and onshore support."

The Department of Labor's determination that outsourcing cost the CKE Restaurant employees their jobs was one of more than 2,400 such certifications made in 2010.

Outsourcing IT jobs is not unusual, especially in the restaurant industry, because of the cost, said Frank Casale of the Outsourcing Institute and co-founder of the Institute for Robotic Process Automation. "It's going to be cheaper. From the standpoint of efficiency, it's going to be better."

The Senate Health, Labor, Education and Pensions Committee has scheduled a Feb. 7 hearing on Puzder's nomination, a hearing that has been postponed at least twice. Committee Democrats have offered up current and former employees of his companies to tell unflattering stories about their treatment while working for Puzder's companies.

Democrats and their allies say Puzder's corporate mindset and his public statements call into question his fitness to defend government rules designed to protect American workers. And they've assailed Puzder's opposition to a big raise in the minimum wage, among other positions.

"The proof that the Trump administration won't look out for working families is right there: Trump and his cabinet built their careers by hurting U.S. workers," said Jessica Mackler, president of super PAC American Bridge, which backed Hillary Clinton during the 2016 campaign.

At a 2013 American Enterprise Conference, Puzder said Hardee's Restaurant operators in the Southeast and Midwest were jealous of the immigrant-heavy workforce in California.

"In other parts of the country you often get people that are saying, 'I can't believe I have to work this job,'" he said. But in California, he added, "with the immigration population you always have the, 'Thank God I have this job' kind of attitude."

Puzder also has talked about replacing American workers who demand higher wages with robots, which he said are always polite, never late, and don't sue their employers for discrimination, according to an interview with Business Insider.

A statement from Puzder released by the Trump campaign in December struck a different note, promising that he'd be "the best champion American workers have had."

Trump and Puzder have said the nominee's role as a jobs creator prepares him be a powerful advocate for American workers.

Puzder tweeted on Jan. 16, "I am looking forward to my hearing."