Businesses can struggle as they deal with issues like poor quality, missed production deadlines and legal disputes. 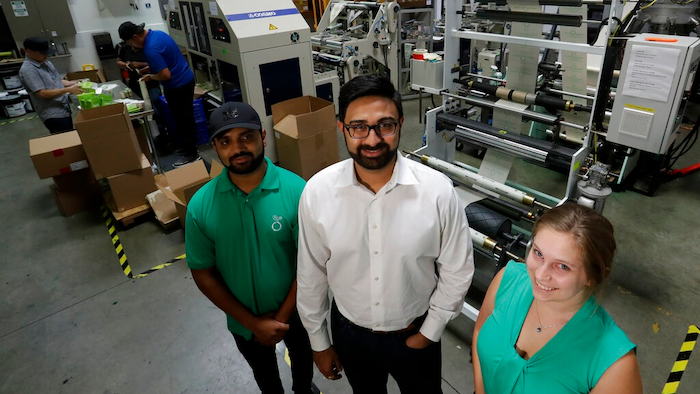 "I was unable to achieve the level of quality control our brand requires in any of the factories we worked with in China," says Lause, whose company, Peekaboos, makes hats with openings for wearers to pull their ponytails through.

To begin with, the factories were unable to make the hats on machines. Lause then had the hats knit by hand, but the sizing was often off or the openings were in the wrong place — problems she only learned about when shipments of the hats arrived.

Small businesses have been drawn to manufacturing overseas for the same reasons as Fortune 500 companies: Labor costs are lower than in the U.S. But there are downsides and complications to making goods overseas and owners have contended with these issues for years, long before the Trump administration's trade wars and tariffs added another layer of difficulty. Small businesses without the resources and bargaining power that larger companies have can struggle as they deal with issues like poor quality, missed production deadlines and legal disputes.

"It's a vexing problem for anyone, but being small and offshore makes it harder," says John Gray, a professor of operations at Ohio State University's Fisher College of Business. The disparities can start during the process of finding a manufacturer, Gray says, noting "large companies will get more attention from the suppliers."

Most companies soldier on and find solutions, but some end up moving their manufacturing to the U.S.

In 2016, Lause began moving the work to a facility in Germantown, Wisconsin. She found engineers who figured out how to get the hats knit on machines, and she discovered it's not as expensive as she thought to manufacture in the U.S.

When the owners of beyond Green began producing their compostable plastic bags three years ago, it was a natural for them to manufacture in India. CEO Veejay Patel came from India and had already been involved in plastics manufacturing in his home country.

But by early this year, Patel and co-owners Rudy Patel and Achyut Patel had reasons to move their manufacturing to the U.S., says Katrina Hart, coordinator of business development for the Lake Forest, California, company.

"Quality control was not up to our needs," Hart says. Customers were complaining that bags, including those used to contain produce in supermarkets, had slits, making them unusable.

The Patels also realized they would save money by not having bags shipped from India to California and then sent to customers across the U.S. Cost aside, their shipping method wasn't as environmentally friendly enough for a company whose mission is to be green. They began production in Lake Forest early this year.

"This reduced our costs, allowed for a better handle on quality control, and now we are able to contribute to the business and economic success of the community that most of our employees grew up in," Hart says.

Problems beyond quality issues can crop up during the manufacturing process. A 2017 paper Gray co-authored studied some of the problems small and medium-sized businesses encountered overseas; it described one company that found out its overseas supplier had unilaterally decided to swap out one of the components in a product. In another case, a clothing company discovered to its surprise that a thinner fabric was being used.

"What you actually get as your final product doesn't exactly match what you originally purchased," the paper quoted one executive as saying.

Companies often end up negotiating with manufacturers to try to get products made as ordered. But sometimes they end up in legal disputes that are difficult to win.

"It's harder to get an accord across time zones and cultural and language differences," says Lee Branstetter, an economics professor at Carnegie-Mellon University's Heinz College.

While very large companies might have employees or representatives at overseas factories as a matter of course to monitor quality, small businesses owners without such help must operate on faith that the goods will turn out right.

When Aaron Muderick wanted components for his putty that's sold as a toy, he turned to a manufacturer in China. The first batch came out well, but the next two were defective. After arguing with the manufacturer about how to address the problems, Muderick, owner of Crazy Aaron's Thinking Putty, hired a representative to keep an eye on production.

"It helped things get better but it also reduced the cost savings because that person was getting a piece of the action," Muderick says.

A decade ago, Muderick decided to manufacture the putty itself at his headquarters in Norristown, Pennsylvania. He had searched for a Chinese factory, but grew increasingly anxious about the possibility that either the manufacturer or one of its employees would steal his formula and start selling their own putty to compete with his. That's the kind of intellectual property theft that has long been a point of contention between the U.S. and China.

"It didn't feel right in my gut so we ended up going on our own path," Muderick says.

Manufacturing overseas can also mean time and travel commitments that are taxing to a small business owner. That added another burden to the manufacturing process for Lause, and helped persuade her to bring the business to the U.S.

"I did not wish to spend significant time in China away from my small children, husband, aging parents, and life back home," she says.

Better IT Security from Outsourcing