They say they don't know what chemicals they've been exposed to. 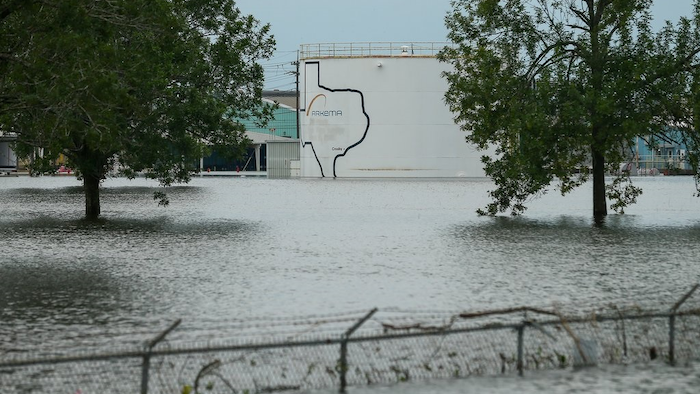 In this Aug. 30, 2017 photo, the Arkema chemical plant is flooded from Hurricane Harvey in Crosby, Texas, northeast of Houston. Nearby residents complain of a 'bitter taste' about the sparse information authorities provided when chemicals at the plant caught fire. They say the company failed to provide sufficient warning beforehand while environmental officials misled them with assurances that the air and water were safe. Critics say testing by authorities and contractors was inadequate to determine whether public health was threatened.
Godofredo A. Vasquez/Houston Chronicle via AP

CROSBY, Texas (AP) — The skeleton crew at Arkema's chemical plant knew it was time to go by the morning of Aug. 29.

Flooding from Hurricane Harvey had knocked out power. Thousands of gallons of chemical-laden water had spilled into the floodwaters. Soon, the company's stores of volatile organic peroxides would overheat and produce fires noxious enough to make first responders vomit. The last workers evacuated by floating over a 6-foot chain-link fence in a small boat.

A half-mile away, Diane and Nolan Glover knew none of this, until the National Guard ordered them to evacuate.

The retired couple in their 60s were busy trying to protect their belongings from three feet of floodwater and didn't think to turn on the radio.

Many of their neighbors also were unaware of the danger. Interviews with about 10 residents show they didn't receive the emergency robocalls from Arkema ordered by a Harris County judge after a sulfuric acid release more than 20 years ago.

Today, they are still angry about all they did not know until the National Guard came knocking on doors that day. They say they still know very little about any potential health effects from the flood and fires. They don't know what chemicals they've been exposed to — or about any threat from air they breathe or water they drink.

They say the company failed them before the accident, and the state and federal government afterward.

"I have a bitter taste in my mouth about Arkema," Diane Glover said. "I feel like they should have reached out to everyone."

The activity of the company and government regulators surrounding the Arkema disaster falls into the pattern that has emerged more than a half-year after the storm, a Houston Chronicle/Associated Press review of public records shows. The extent of the environmental assault is starting to emerge, and Gov. Greg Abbott's emergency declaration suspending state environmental rules remains in effect, making it more difficult for local authorities to press their case against companies that lost control of their petroleum and chemical products.

Environmental Protection Agency officials, along with Arkema, repeatedly assured residents that their air and water were not dangerous.

Company contractors and federal regulators conducted some sampling of air and water as well as solid ash produced by the fires, but critics say it was done in a haphazard, patchwork way that was inadequate to establish whether there is a threat to public health.

Arkema, for example, tested the wells of 37 homes; there are roughly 350 homes within 1.5 miles of the plant, though it's unclear how many get their water from private wells.

"I don't think they did enough analyses," said Hussain Abdulla, an assistant professor of chemistry at Texas A&M University-Corpus Christi, who examined the test results at the request of the news organizations.

EPA test results show peroxide in the air near Arkema. And testing of some private wells at the homes nearby found acetone, a chemical used by Arkema that can cause headaches, nausea, dizziness and confusion.

Federal officials have declined to answer reporters' questions, directing them to the EPA website.

State environmental authorities did not test sediment, groundwater or air around the plant during or after the storm, records show. The Texas Commission on Environmental Quality declined to be interviewed, citing its pending investigation.

The EPA and the District Attorney's office for Harris County, home to Houston, are also investigating. Harris and neighboring Liberty County are suing the company.

Arkema spokeswoman Janet Smith said company officials have taken steps to help those who live near the plant.

"We're extremely sorry that our incident caused an evacuation at a time when our neighbors were already reeling from a historic storm," Smith said.

The company is the North American branch of the Colombes, France-based chemicals manufacturer. It has two dozen U.S. facilities; the one in Crosby has a history of regulatory problems related to the improper handling and storage of hazardous materials.

"What we found so far was just a lack of preparation for this kind of event," said Rock Owens, Harris County's environmental attorney.

Two years after a 5-year-old girl was severely burned during a 1994 sulfuric acid release at the plant, a county judge ordered the company to alert residents within a mile of its property whenever potential dangers arise.

Residents estimate those emergency calls came more than 10 times during the past 10 years.

But the Glovers, along with their neighbors Margaret and Tom Lewis, say that call never came when Harvey bore down.

Owens said the company appears to have failed to activate the call system.

Smith, the company's spokeswoman, said Arkema communicated with local residents through media statements and social media posts, put updates on its website, created a 24/7 phone hotline and placed messages on an industry-run cell phone application for informing the public about potentially hazardous incidents.

Before its first update on Aug. 29, the plant had lost all electrical power, forcing the skeleton crew to move highly volatile organic peroxides into refrigeration trailers so they would not explode.

"Arkema does not believe the situation presents a risk to the community or the ride-out crew, due to the distance between the refrigerated cars and any people," the update said.

Six hours later, the company warned the situation had become "serious," but did not inform residents of a wastewater spill earlier that day.

State records show that Arkema reported the accidental release of up to 18,000 gallons of stormwater laced with mineral oil and residual organics. That spill, which mingled with floodwaters in the plant and ran downstream toward Cedar Bayou, also caused a release of chemicals into the air including ethylbenzene, which is linked to cancer but can also cause inner ear and kidney damage, as well as vertigo; trimethylbenzene, which can cause chemical pneumonia and chronic bronchitis; and tert-butyl alcohol, which can affect the kidneys and thyroid.

"We reported this inundation of our wastewater system to TCEQ, which is a public agency," Smith said. "We broadly notified the community about issues that we believed presented a potential threat."

The Glovers did not see any of the company's updates. The couple does not use social media. Neither do the Lewises.

On Aug. 30, Arkema's website said the organic peroxide in the refrigerated containers likely would catch fire.

The first trailer caught fire Thursday, Aug. 31, and Arkema later reported it had released chemicals including acetone, nitrogen dioxide and carbon monoxide, according to the county lawsuit. After two more trailers burned, the remaining ones were destroyed in a controlled burn on Sept. 3.

Volatile organic compounds were detected in the air 2.5 to 3 miles northwest of the plant, accompanied by a laundry detergent-like odor, smoke and falling ash, according to the suit.

Bret Simmons cried in pain as he pushed his motorcycle through floodwaters near Arkema on Aug. 29, he recounted in a lawsuit.

Once he and his wife, Phyllis, made it safely to higher ground, they found his legs covered in blisters, lesions and burns. He sought medical treatment.

On Sept. 1, the EPA collected six surface water runoff samples from four locations outside the evacuation zone near residential homes. Levels were lower than what would warrant an investigation, a news release said,

The results of 13 samples showed elevated levels of acetone and methane. Benzene, a known carcinogen, also was detected in one area tested, according to results published on the state environmental agency's website.

A&M Corpus Christi's Hussain Abdulla said he was concerned about the "approaches and analysis" of the testing.

For example, he noted the apparent lack of testing for dioxins, which could have been released when the refrigerated trailers full of organic peroxides burned.

The Glovers treated their water well with bleach to cleanse their drinking water, but they lacked the funds to have it tested. Lab-certified well water testing can cost $25 to $400.

The Glovers did not know they could ask Arkema to test their water, as the company did for some residents.

Arkema's contractor tested 37 drinking water wells around the plant, Smith said, and "none of the wells we tested showed levels of our chemicals that exceeded residential limits established by the State of Texas."

Kevin Thompson, a West Virginia-based attorney representing Bret and Phyllis Simmons and about 660 other Crosby residents, said initial results of tests conducted on behalf of his firm show that water in and around the plant is toxic.

Smith said Arkema does not plan on testing any more wells, adding, "we don't believe additional well-water testing is warranted because none of our testing has shown levels of our chemicals that exceed residential limits."