His "misrepresentations" of the situation allegedly led two sheriff's deputies to drive directly into a toxic cloud. 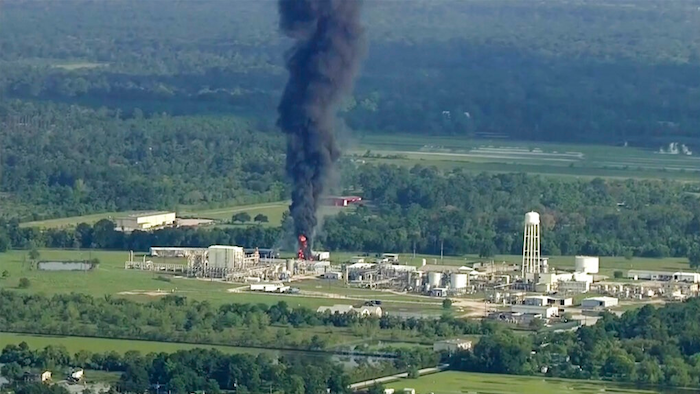 In this Sept., 2017 file photo, smoke rises from a chemical plant in Crosby, near Houston, Texas. The Harris County District Attorney's office announced Wednesday, April 10, 2019 that Arkema's vice president of logistics, Michael Keough, has been indicted for felony assault. Keough, is another senior employee of the chemical company now facing criminal charges connected to a 2017 explosion at Houston-area plant following Hurricane Harvey.
KTRK via AP, File

DALLAS (AP) — Another senior employee at a chemical company is facing criminal charges connected to a 2017 explosion at a Houston-area plant following Hurricane Harvey.

Michael Keough, vice president of logistics for Arkema Inc.'s North American subsidiary, was indicted for felony assault over his actions ahead of a chemical fire and explosion at the company's Crosby facility, the Harris County District Attorney's office announced Wednesday. The company was also charged.

Keough falsely told officials that Arkema was monitoring potentially explosive chemical tanks in real time when the company had insufficient data to give early warning, according to District Attorney Kim Ogg. These "misrepresentations" led two sheriff's deputies to drive directly into a toxic cloud, which then spread to exposing others, she said.

An attorney for Keough, Dan Cogdell, called the indictment "absurd" and "beyond rational thought."

"There has, quite literally, never been a prosecution like this one for one singular reason — what Mike did wasn't a crime" Cogdell said in a statement.

The charges against Keough were announced weeks after fires at two other Houston-area chemical plants , and on the day President Donald Trump visited Crosby to sign executive orders designed to speed up oil and gas pipeline projects

Ogg acknowledged during a press conference that criminal charges are rarely brought against company employees over environmental violations, but said civil regulations have proven insufficient to protect the public.

"Too often corporations are simply allowed to pay fines and that doesn't change corporate behavior," she said.

Keough is the third Arkema employee to be indicted since the hurricane knocked out power at the company's Crosby facility. Without electricity, some of the chemicals at the plant caught fire and partially exploded, sending plumes of smoke skyward.

Richard Rowe, the France-based company's chief executive, and plant manager Leslie Comardelle were charged with releasing toxic chemicals last year. They are set to be tried in May.

In 2018, the U.S. Chemical Safety Board released a report saying that Arkema failed to consider how a Harvey-level flood could affect its electrical power system.

A lawyer for the company, Rusty Hardin, said Wednesday that prosecutors are trying to hold Arkema responsible for an "Act of God" and called the case "political."

Those Near Damaged Plant Fear Water