The wings fold out from underneath the car. Also, improved exoskeletons, and we finally see inside Hyperloop's pods.

This week we finally got a glimpse at Hyperloop's pods. Virgin Hyperloop One and the Roads and Transport Authority (RTA) of Dubai put the pods on display as part of Innovation Month in the United Arab Emirates.

Visitors got to experience the stylish and roomy pods which will take passengers from Dubai to Abu Dhabi in 12 minutes. Right now, that trip takes about 90 minutes by car. According to the RTA, the system could accommodate up to 10,000 passengers per hour, 5,000 in each direction. It will primarily run above ground and then into tunnels as it reaches the city centers.

Hyperloop has been working on the project since 2016 when the company received $50 million in funding for the project. The hope is to have functional prototype by 2020.

Similar to a plane, each pod is divided into two classes, silver and gold, with five seats in gold and 14 in silver, which means that each trip would need about 53 pods headed in each direction to hit 10,000 passengers per hour.

The seats were designed by BMW and given the fact that you're traveling about 746 mph you'll need to be seated and buckled up at all times. The design doesn't have windows, but it does have infotainment screens in the arm rests.

No word on how much tickets may cost, but a report in The National has estimated the cost of the project to hit $4.8 billion, which works out to $52 million per mile.

Hyperloop is currently working on a feasibility study regarding a route between Kansas City and St. Louis, but the first Hyperloop route may actually run in India where the company is already building a test track. Hopefully, as the tech scales, the costs will come down. You know, just like every infrastructure project.

Exoskeletons are already in the industry. BMW is using them to build cars; Lockheed's FORTIS has been used in shipyards; and we'll soon see soldiers using them to take the load off when they're carrying high-powered weapons.

Well, Harvard researchers have developed a new machine learning algorithm that can improve the exoskeletons performance by tailoring its assistive functions to each individual user. In the past, such customization jobs were laborious and time-consuming. With this new method, the process would only take 20 minutes.

The researchers call it human-in-the-loop optimization, and it uses real-time info like your breathing patterns to adjust the assistive controls.

Their work is specific to soft wearables — in this case a small hip extension assistive device — but is could soon be applied to more complex systems, and not just in the industrial field, but other systems that could improve the lives of the physically and cognitively disabled.

Another day, another flying car, but this one promises to be the world's first flying sports car. The SamsonSky Switchblade has been under development for about 10 years; the company plans to finally fly this folded-wing tricycle sometime in 2018.

According to company founder and CEO, Sam Bousfield the concept has been on his mind since he first sketched it 27 years ago when he was in the fifth grade.

According to the Chief Builder Ron Burch, the Switchblade will be capable of hitting 120 mph on the ground, and 190 mph in the air at about 13,000 feet. So far, it has been popular, with about 70 orders, and around 300 reservations.

The company chose the layout based on a design that would work best for both a flying and driving vehicle — the reason the wings swing out from underneath the vehicle, and the tail extends from the back. The entire transformation takes about three minutes.

It has side-by-side seating with room for two passengers and about 50 pounds of luggage. The engine is a 190 HP Liquid-Cooled V4 that runs on regular unleaded, and has a range of 450 miles

According to SamsonSky, the vehicle is a flying sports car not just because of its speed capabilities, but also its Italian-inspired design, high-powered racing brakes, nimble handling, and the fact that it has the same power-to-weight ratio of the 2017 Corvette.

It is important to note that it is classified as an experimental aircraft and it requires the owner to build 51% of the vehicle. The company says that the kit is pretty well assembled when it is delivered, but it also offers builder assist centers that can help finish putting together the vehicle in three weeks.

Good luck on the test flight boys, the flying car industry is one tough cookie to crack. 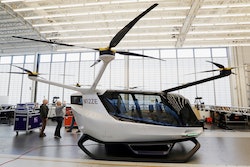