The Skai is a Hydrogen-Powered Electric Flying Vehicle

It looks like an oversized drone crossed with a luxury SUV. 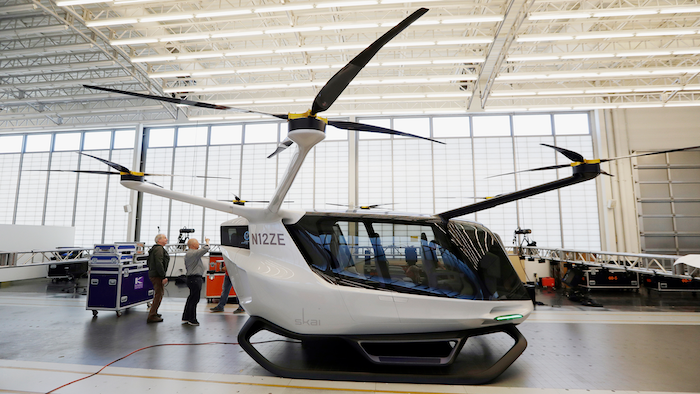 This Tuesday, May 28, 2019, photo shows the Skai vehicle, developed by Alaka'i Technologies in Newbury Park, Calif. The transportation company is betting its hydrogen-powered electric flying vehicles will someday serve as taxis, cargo carriers and ambulances of the sky.
AP Photo/Marcio Jose Sanchez

LOS ANGELES (AP) — A transportation company is betting its sleek new hydrogen-powered electric flying vehicles will someday serve as taxis, cargo carriers and ambulances of the sky, but experts say they will have to clear a number of regulatory hurdles before being approved for takeoff years in the future (view photos in gallery).

With six rotors on the roof and seats inside for five people, a passenger model of the Skai (pronounced "sky") unveiled Wednesday near Los Angeles resembles an oversized drone crossed with a luxury SUV.

Like a drone, the vehicle from Alaka'i Technologies takes off and lands vertically. It's one of many similar electric flying crafts in production, including prototypes from Boeing and Airbus that made successful test flights this year, according to Vertical Flight Society, an industry group.

Most are powered by batteries, which can add a lot of weight. The Skai instead uses very light hydrogen fuel cells to run its rotors, giving it a range of 400 miles (644 kilometers) and the capacity to carry 1,000 pounds (454 kilograms) in people or freight, the company says.

"We just couldn't get to the point where we could have enough batteries to get to the payload that we knew we needed," CEO Stephan Hanvey said of the choice to switch to hydrogen power. 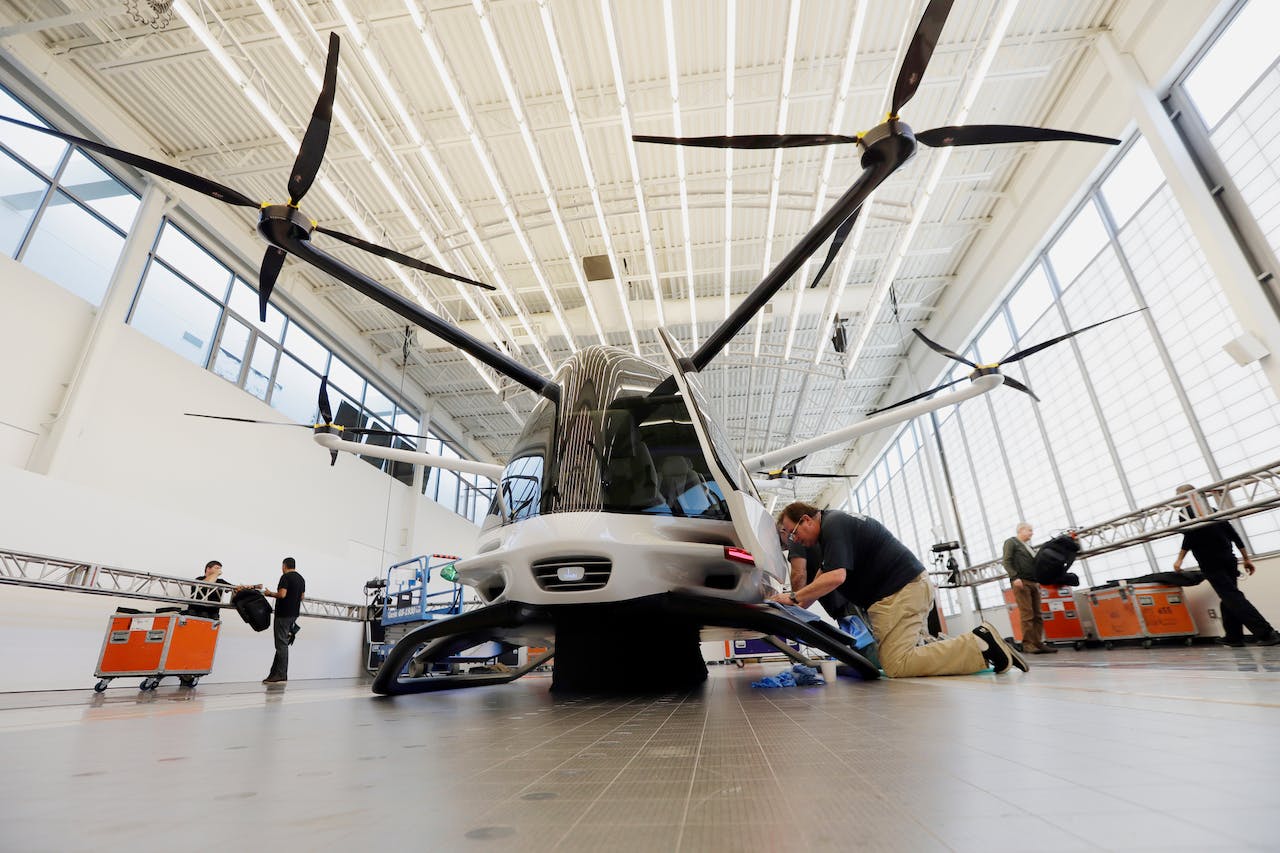 In this Tuesday, May 28, 2019, photo, workers prepare the Skai vehicle, developed by Alaka'i Technologies, for a special unveiling in Newbury Park, Calif. The transportation company is betting its hydrogen-powered electric flying vehicles will someday serve as taxis, cargo carriers and ambulances of the sky.AP Photo/Marcio Jose Sanchez

Alaka'i says it's planning a test flight near its Massachusetts headquarters.

It would be flown by an on-board pilot using a pair of joysticks, but the technology exists to eventually fly it remotely and even autonomously, Hanvey said.

It will be years before the Federal Aviation Administration allows the autonomous flight of passenger vehicles, said attorney Thaddeus Lightfoot, a partner with the firm Dorsey & Whitney who helps companies navigate FAA rules.

Regulators are still grappling with the proliferation of smaller drones — those under about 50 pounds flown by hobbyists and filmmakers. The FAA just this year eased restrictions on flying small drones over crowds and at night.

Drone-like vehicles such as the Skai must first simply prove their airworthiness, like any common plane, Lightfoot said. After that, getting commercial certification is another convoluted process, he said.

"The technology is interesting, but the regulatory road will be very long," said Lightfoot, adding that the idea of allowing people to fly in a large aircraft without a pilot is "well outside the current regulatory regime."

Hanvey conceded that it could take at least a decade before the company realizes his vision of a fleet of electric flying vehicles ferrying passengers over major cities at nearly 120 mph.

Before that, he hopes to see Skai aircraft used by first responders to send in food or water following disasters like hurricanes or wildfires that can destroy infrastructure.

It could be used as an ambulance and to evacuate people, Hanvey said. Outfitted with a transmitter, one could serve as a mobile cell tower, hovering for up to 10 hours over a neighborhood to provide communication services, he said.

Join David Mantey, Curt Anderson, Damon Pistulka and Gary Bales to talk about easy e-commerce strategies for manufacturers. We'll tell you how to find your pink shoe with purple laces and fix your we-we problems (it will all make sense). Watch it now.
Nov 30th, 2021

The company said no serious safety issues were detected and common side effects were mild to moderate.
Dec 7th, 2021