The suit is designed to prevent and reduce musculoskeletal injuries.

Research is being done to try and take the burden off of ground troops while at the same time increasing their ability to travel longer distances, and carry more powerful weapons. Back in March, we showed you the "third arm," a four-pound weapon mount that attaches to a soldier’s vest to help him/her carry larger weapons. When soldiers start walking around with handheld railguns, they're going to need a little help carrying the increased loads, and improving ballistic performance.

Now, engineers at the U.S. Army Research Lab at the Aberdeen Proving Ground in Maryland are working on an exoskeleton suit that will help soldiers march longer, carry heavier gear, and improve mental acuity.

The DARPA-funded suit is made of pulleys and gears that are designed to prevent and reduce musculoskeletal injuries. In tests, it has helped soldiers improve endurance and reduced stress on their joints.

Engineers have been working on the project, which is part of the Department of Defense's Warrior Web program, for more than three years.

The technology is still five to ten years away from being used in the field, but is could be integrated into future soldier systems. But it won’t happen without a little help, and researchers are looking for partners.

The program will soon come to an end, and researchers hope to find collaborators who will expand upon their work, and keep the exoskeleton headed down the right path.

The technology could extend into other applications, particularly the medical field and the sports science and fitness management industry. 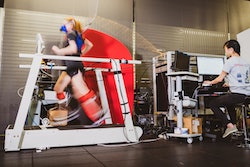 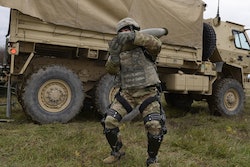