When you're a collector of anything, it's hard to find spare parts. Whether its antique tractors or classic cars, if you can't find the right part, your prized possessions may be relegated to the garage, rendered otherwise useless.

3D printing is changing the spare part game, and news out of Porsche Classic may be music to many collectors' ears. In the past, the problem has been that these parts were in very limited demand. Even though Porsche Classic currently has 52,000 part numbers, when a spare is no longer in stock, the company typically uses the original tools to make a replacement. Sometimes, they have to build new tools, but doing so for small-part production is costly.

The company has added 3D printers to its manufacturing capabilities, making parts that still meet the requirements of the original specifications, from both a visual and technical perspective.

For example, consider the clutch release lever on the Porsche 959. They only made 292 Porsche 959s. The company has no parts in stock and it’s inefficient to make another lever from grey cast iron. The team turned to selective laser melting, a process that builds the part out of steel powder that melts together when it's hit by a laser. The layer-by-layer process built a new lever that passed all the requisite fit, function, and quality tests.

The best part of the technology is that you only need a CAD file or 3D scan to make the part. In the future, we may not have any parts in stock or tools in storage. We'll have a CAD file on hand and a 3D printer at the ready, and the car will never be relegated to the garage. Now, only 51,972 more parts to go.

Professor Figures Out How to Stop 3D Printed Concrete from Collapsing

Over the last few years, we have seen some interesting and elaborate applications in which researchers are using large format 3D printers to build concrete structures.

The videos make it look simple. A 3D-printed home that was built in 24 hours? Why aren't we 3D printing homes, or at least very structurally sound sheds across the world.

Well, first of all, what some of those videos edit out, is that the 3D-printed walls have a tendency to collapse or fall over - but it's much harder to find footage of that.

A researcher at Eindhoven University of Technology in the Netherlands may have created an answer to this common problem. Professor of Applied Mechanics Akke Suiker developed a model that allows engineers to easily determine the dimensions and printing speeds in order to make sure that 3D-printed concrete structures remain stable.

The professor actually came up with the idea one day as he was coming into the office and saw the university's concrete printer in action. The university officially unveiled its concrete 3D printer in 2016.

Concrete is typically 3D printed without any supporting formwork, and with this equation, engineers can now understand how quickly they can lay down printing layers, given the material curing characteristics and wall dimensions, without the structure collapsing.

He also figured out how to 3D print structures using as little material as possible. According to Suiker, his model will not only be beneficial to people 3D printing concrete structures, but anyone using any type of 3D printer.

As for the concrete homes, it looks like we’re still mixing bags of concrete in the wheelbarrow, for now.

Flying cars are not yet an exact science. While some companies like Uber and Airbus have aggressive plans to enter the airspace with flying taxis by the early 2020s, it seems like we are constantly reminded of the dangers and logistical challenges that come with pilot flying cars.

In May 2015, the AeroMobil flying car crashed during its maiden voyage while piloted by the aircraft's inventor, Stefan Klein. In May 2017, Jon Karkow, the man who designed the Icon A5 flying (and amphibious) car died when he took a wrong turn midflight. The A5 is also claimed the life of former MLB pitcher Roy Halladay.

This week a video was posted of a husband and wife trying to take off in a SkyRunner MK 3.2, which the company calls a combination of a light-sport aircraft and a military-grade ATV. The selling point is that the craft can pretty much take off from anywhere, but from the video, we can see that's simply not true.

The couple leaves the ground, but the pilot doesn't climb fast enough and (well, you can see) smashes into the side of the building. The couple somehow survived the crash, but were severely injured.

According to the company, the FAA-certified flying cars (used loosely) should be easy to operate, with a single throttle pedal to climb and descend, and two controls to move the car right or left. According to reports, the vehicles have received interest from U.S. Special Forces.

The company says the aircraft, which starts at $139,000, would make James Bond blush. Likely not, because Mr. Bond would've cleared that building. 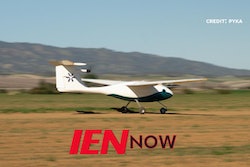 Unmanned Aircraft Gets OK to Spray Crops at Night 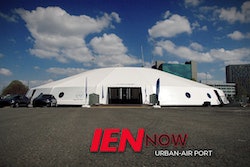 New Airport a 'Starting Gun' for Future of Transportation 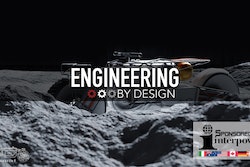