August US Cutting Tool Orders Up 3.3% from July, Though Slowdown Looms

MCLEAN, VA — August 2019 U.S. cutting tool consumption totaled $205.1 million according to the U.S. Cutting Tool Institute (USCTI) and the Association For Manufacturing Technology (AMT). This total, as reported by companies participating in the Cutting Tool Market Report collaboration, was up 3.3 percent from July's $198.5 million and down 8 percent when compared with the $222.8 million reported for August 2018. With a year-to-date total of $1.7 billion, 2019 is up 1.2 percent when compared with 2018.

"August numbers reflected an increase from July but an 8% decrease from August 2018," said Phil Kurtz, president of USCTI. "While 2019 year-to-date market remains positive, the gain is deteriorating and may turn negative before year-end as there are a number of reports now showing an overall manufacturing slowdown."

Cutting tool consumption continues to decelerate in-line with the slowing U.S. industrial sector. Robust U.S. manufacturing activity of 2018 has slowed, impacted by uncertain economic growth both here and abroad as well as ongoing trade issues. The weakening economic outlook drives softening industrial production, manufacturing output and business spending. This means that the U.S. benefit from rising inventories is over and inventory liquidation has begun. With industrial production likely to continue to be sluggish for the foreseeable future, most manufacturing has begun an inventory liquidation of short-cycle components.

According to ESL Consultants president Eli Lustgarten: "The cutting tool sector is not immune. Cutting tool demand M/M has been volatile for the 8 months of 2019; but 2019 YTD gains peaked in January and have continued to soften as the year progressed. August YTD data shows down 8 percent and we expect cutting tool activity to continue to decelerate — if not contract — for the remainder of 2019 and likely into next year." 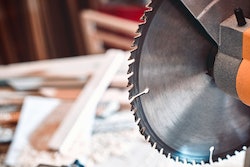