He says there is no imminent threat of a spill. 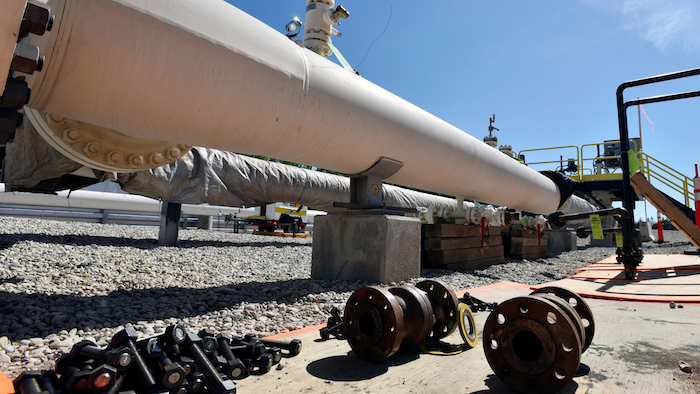 In this June 8, 2017 file photo, fresh nuts, bolts and fittings are ready to be added to the east leg of the pipeline near St. Ignace, Mich., as Enbridge prepares to test the east and west sides of the Line 5 pipeline under the Straits of Mackinac in Mackinaw City, Mich.
Dale G Young/Detroit News via AP, File

TRAVERSE CITY, Mich. (AP) — Michigan Gov. Rick Snyder refused Monday to halt the flow of crude oil through twin pipelines in a Great Lakes waterway as they are inspected for gaps in exterior coating, saying there was no imminent threat of a spill and the shutdown could cause a shortage of propane needed for winter heating.

Snyder also turned down two other proposals from critics of Enbridge Inc.'s Line 5 on the Michigan Pipeline Safety Advisory Board who are unhappy with an agreement struck between the Republican governor's administration and the Canadian company last November.

The deal set a timetable for determining the future of the nearly 5-mile-long (8 kilometers) segment at the bottom of the Straits of Mackinac, which links Lakes Huron and Michigan.

"With all respect, I do not believe an immediate and extended shutdown of the pipeline in the middle of the winter is a proper approach that safeguards the health and welfare of Michigan citizens," Snyder said in a letter to the board.

Mike Shriberg, a board member and Great Lakes regional director for the National Wildlife Federation, said the Republican governor's response "appears to be kicking the can down the road while the Great Lakes remain at risk."

About 23 million gallons (87 million liters) of oil and liquid natural gas move daily through the pipeline, which runs from Superior, Wisconsin, to Sarnia, Ontario. The underwater section is divided into two lines, which were laid in 1953. Enbridge, based in Calgary, Alberta, says the segment is in good condition while skeptics contend it's increasingly vulnerable to a rupture.

During a Dec. 11 meeting, some advisory board members complained about being cut out of the state's negotiations with Enbridge. They proposed three resolutions, one seeking a Line 5 shutdown until any gaps in its enamel coating are found and repaired.

Enbridge has acknowledged the pipelines have numerous spots with missing coating and bare metal. Some have been fixed and inspections will continue this spring, spokesman Ryan Duffy said.

Another resolution targeted a provision in the agreement requiring a temporary halt of the oil flow whenever storms produce waves at least 8 feet (2.4 meters) high for longer than an hour. The resolution called for a shutdown when sustained waves are at least 3 feet (0.9 meter) high.

A third proposal sought a more thorough study of ways to meet Michigan's needs without Line 5, perhaps by drawing oil from other pipelines.

There was confusion during the board meeting about whether the resolutions were approved because numerous members abstained. Snyder said in his letter that none received enough votes to pass and the chairwoman, Michigan Agency for Energy Director Valerie Brader, erred by stating otherwise.

Responding to the second resolution, Snyder said no bad-weather shutdown of Line 5 had been required before last November's bargain was struck and the agreed-on provision required lengthy negotiations. Reopening the issue "would be extremely unlikely" to yield tougher terms, he said.

The final resolution is unnecessary because the state is already looking at alternatives for getting propane and transporting Michigan crude oil to market, Snyder said.

The agreement set an Aug. 15 deadline for deciding the long-term fate of the underwater Line 5 segment. Snyder said he would ask Enbridge to push the date to Sept. 30 to accommodate a risk analysis being conducted by marine engineer Guy Meadows of Michigan Technological University, which is scheduled for completion in mid-September.

"The state's failure to produce a timely and effective risk and alternatives analysis should not be an excuse for defensiveness and inaction," he said.

Duffy said Enbridge "will continue to focus on implementing the agreement and on safely delivering the energy that Michigan businesses and residents rely on."