The goal was to "obtain benefits, concessions and advantages" for Fiat Chrysler in the negotiation and execution of contracts between the company and the UAW. 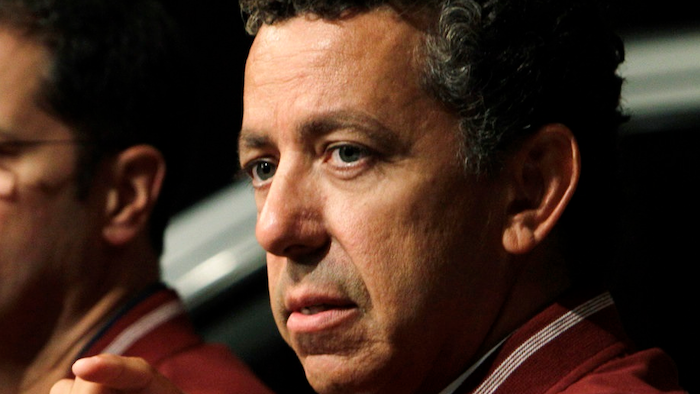 In this July 25, 2011 file photo, Al Iacobelli, former Vice President Employee Relations, Chrysler Group LLC, speaks at Chrysler Group LLC headquarters in Auburn Hills, Mich. Iacobelli who handled labor relations for the company has pleaded guilty to showering more than $1.5 million in cash and gifts on high-ranking members of the United Auto Workers. Iacobelli admits that he was trying to gain an advantage for Fiat Chrysler during his relationship with the union. He pleaded guilty Monday Jan. 22, 2018 to conspiracy and a tax crime and faces eight years in federal prison.
AP Photo/Paul Sancya File

DETROIT (AP) — A former Fiat Chrysler executive pleaded guilty Monday to showering more than $1.5 million in cash and gifts on high-ranking members of the United Auto Workers, admitting he turned the budget of a company-sponsored training center into a slush fund to curry favor with union officials.

Al Iacobelli said a key beneficiary was General Holiefield, a UAW vice president who was responsible for negotiating with Fiat Chrysler on behalf of the union. A $262,000 mortgage on his suburban Detroit home was paid off in 2014 with a check from the training center.

Iacobelli pleaded guilty to conspiracy and a tax crime and likely faces eight years in federal prison. He failed to report $861,000 in money taken from the training center in 2014.

Holiefield died in 2015, but his wife, Monica Morgan, is charged in the case. In his plea agreement, Iacobelli admitted to providing first-class air travel, designer clothing, furniture, jewelry and fancy watches to the couple and others, from 2009 through mid-2015.

The goal was to "obtain benefits, concessions and advantages" for Fiat Chrysler in the negotiation and execution of contracts between the company and the UAW, the plea deal states.

The plea agreement includes at least one instance where Iacobelli apparently influenced Holiefield. He said Holiefield had been "scripted" ahead of a 2013 meeting with the union's international executive board. The topic was a multibillion-dollar deal involving a retiree health fund. No other details were disclosed.

The government said the money spent by Iacobelli came from the UAW-Chrysler National Training Center in Detroit. Fiat Chrysler made annual payments of $13 million to $28 million to the center from 2009 to 2014. Iacobelli and Holiefield were co-chairmen.

Fiat Chrysler and the UAW said they were unaware of the scheme while it was unfolding. Iacobelli was fired in 2015.

"I encourage you not to be discouraged by the actions of a few people that betrayed our core principles and our standards of morality, integrity and quality," Fiat Chrysler chief Sergio Marchionne wrote to workers last summer.

Another Charged in Union Scheme

An earlier effort to reopen more quickly backfired with a surge in cases and hospitalizations.
Sep 23rd, 2020

A Coast Guard analysis found no fault with the design of the South Korean-owned Golden Ray.
Sep 23rd, 2020

The law could force companies to avoid a region that produces 80% of the cotton in China.
Sep 23rd, 2020

SKF to Consolidate Ohio, South Carolina Factories and Invest in 2 Others

The Sweden-based Bearings maker is investing $61.5 million between factories in South Carolina and Mexico, enabling the consolidation.
Sep 23rd, 2020

A closer look at how this threat continues to grow, and how it impacted one of its latest victims: Jack Daniel's.
Sep 22nd, 2020

The facility will monitor potential threats posed by space junk to satellites or people on the ground.
Sep 22nd, 2020
Follow Us
Most Recent