The former head of labor relations admitted that he turned the budget of a company-sponsored training center into a slush fund.

DETROIT (AP) — A former Fiat Chrysler executive was sentenced to 5 ½ years in federal prison Monday in a scheme to curry favor with union officials by showering them with cash and gifts.

Former head of labor relations Alphons Iacobelli admitted that he turned the budget of a company-sponsored training center into a slush fund. He's the highest-ranking company official sentenced thus far in a federal probe that includes training centers at General Motors and Ford.

Prosecutors have said in court documents that the goal was to get benefits and concessions for Fiat Chrysler in the negotiation and execution of contracts between the company and the United Auto Workers.

The Detroit News and Detroit Free Press reported that Iacobelli, 58, apologized, accepted responsibility and pledged cooperation in the probe before U.S. District Judge Paul Borman. He also was ordered to pay $835,523 in restitution.

Iacobelli pleaded guilty in January to conspiracy and tax crimes in a scheme worth more than $1.5 million.

He told the court at the time that a key beneficiary was General Holiefield, a UAW vice president who was responsible for negotiating with Fiat Chrysler. A $262,000 mortgage on Holiefield's suburban Detroit home was paid off in 2014 with a check from the training center.

Iacobelli allegedly failed to report $861,000 in money taken from the training center in 2014. He allegedly bought himself a Ferrari, jeweled pens and an outdoor kitchen and pool for his home in suburban Detroit.

Holiefield died in 2015, but his wife, Monica Morgan, was charged in the case.

In a statement Monday the union denied any link between the payments and contract negotiations.

"There are many layers of checks and balances in our contract negotiations and ratification, including membership voting," the statement said.

The government said the money spent by Iacobelli came from the UAW-Chrysler National Training Center in Detroit. Fiat Chrysler made annual payments of $13 million to $28 million to the center from 2009 to 2014. Iacobelli and Holiefield were co-chairmen.

The case has led to seven convictions. 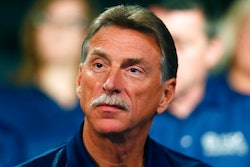 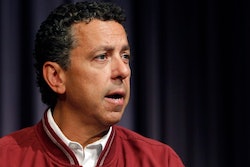