UAW president Dennis Williams urged consumers to buy union-made vehicles first, then those made at non-union factories in the U.S. 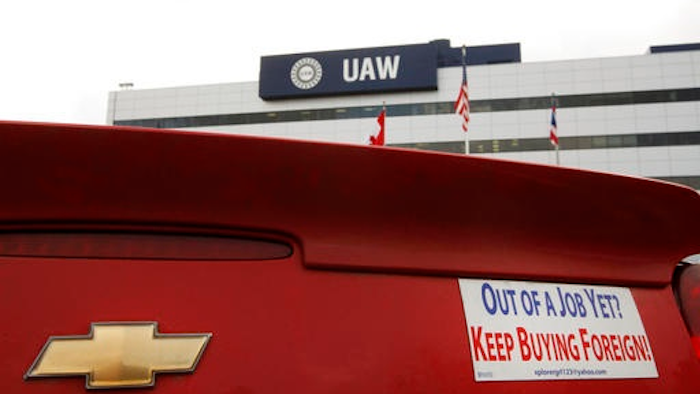 In this Dec. 12, 2008 file photo, a bumper sticker is displayed on a Chevrolet outside the United Auto Workers headquarters in Detroit. The UAW union is working on an advertising campaign that urges people to buy U.S.-made cars and trucks in an effort to build on what the union sees as nationalistic sentiment that President Donald Trump tapped into during the election.
AP Photo/Paul Sancya, File

DETROIT (AP) — The United Auto Workers union is preparing an ad campaign that urges consumers to buy U.S.-made cars and trucks as it tries to tap into President Donald Trump's efforts to rebuild the country's manufacturing sector.

President Dennis Williams said the ads could be similar to 1970s garment workers campaign with a catchy jingle that told people to look for a union label on clothing.

Williams told reporters Thursday that the union wants to take advantage of what it sees as a movement in the U.S. to bring back manufacturing jobs lost to cheaper-labor countries such as Mexico. "If it's not built in the United States then don't buy it," Williams said Thursday at the UAW's headquarters in Detroit.

He urged consumers to buy union-made vehicles first, then those made at non-union factories in the U.S. In essence, he's telling people to buy a U.S.-made Toyota Camry over a Mexican-made Ford Fusion, which may put him at odds with Detroit automakers.

Trump used the slogan "Make America Great Again" in his campaign to defeat Hillary Clinton. He also campaigned on renegotiating the North American Free Trade Agreement, which he blamed for the loss of U.S. manufacturing jobs to Mexico.

The UAW is likely facing an uphill battle. The success that foreign-made cars have had in the United States, as well as the popularity of other imported goods, suggests that consumers are more focused on price and quality rather than simply whether something is made in the U.S.

Polls also suggest this is true. An Associated Press-GfK poll last April found that Americans would like to buy products made in the United States, but not if they cost more. Given the choice between a $50 pair of pants made overseas or an $85 pair manufactured in the United States, two-thirds said they would buy the cheaper pair.

Allen Adamson, founder of BrandSimple consulting in the New York area, said the simplicity of a 'Buy American' campaign might work for a short time with part of the U.S. population. But the message could become muddied because foreign automakers build some models here and Detroit automakers build some in other countries, he said.

"If there ever was a time to give it a try, that time is now," he said. "I don't think it will turn into action because it's too complex and confusing for the average consumer."

Williams, whose union endorsed Clinton, didn't say when the ads would start.

Williams also told reporters the UAW is willing to work with Trump to redo the trade deal. It's still researching the border tax Trump has talked about on goods imported from Mexico.

A number of automakers have announced new investments in the U.S. or a shift in production plans since Trump won the election, with Trump taking credit for most of them. Williams said factory investment and jobs announcements by General Motors and Fiat Chrysler were in the works long before Trump was elected. But he gave Trump credit for pressuring Ford to scrap a new small-car factory in Mexico and keep production of a low-selling Lincoln SUV in Kentucky.

While Ford canceled the Mexico factory, it still will move production of the Focus compact from the Detroit area to an existing Mexican plant. No U.S. jobs would be lost because the U.S. plant will get new vehicles.

The union leader also said that six to eight months ago, workers at electric car maker Tesla Inc.'s factory in Fremont, California, contacted the UAW about representation. The union has sent a small number of organizers there, but it's up to workers whether the UAW will start a full organizing campaign, Williams said.