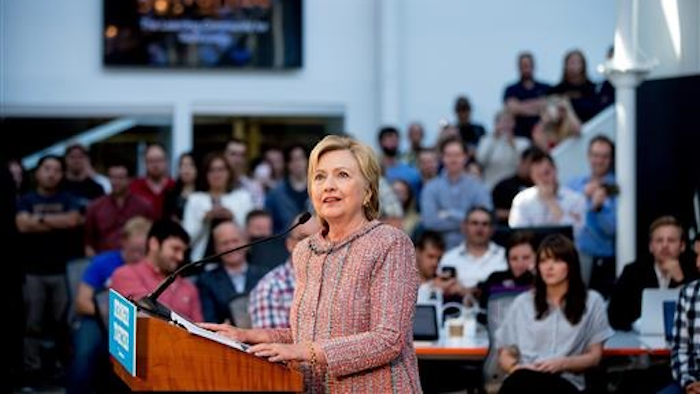 "We need more job creators and we need more young people starting businesses," the presumptive Democratic nominee told a crowd of coders inside a Denver tech training facility and workspace that houses several start-ups. She was on a brief campaign swing through the battleground state of Colorado.

Clinton was looking to showcase her economic chops and woo young voters who flocked to the candidacy of her primary rival, Sen. Bernie Sanders.

She proposed permitting start-up founders and early employees to forgo payments on their federal student loans for up to three years. Those who launch businesses that provide social benefits would also be permitted to apply for forgiveness of up to $17,500 of their debt after five years.

Speaking later in Los Angeles, at a town-hall style meeting with digital content creators, Clinton called student debt a "huge burden" that could hobble young people into their 40s and 50s, blocking them from buying homes or starting businesses.

Along with refinancing, she said repayment plans should be based on a percentage of a person's income, not a fixed amount set on an interest rate.

"It boils down to something that I really disapprove of," Clinton said, "and that is the federal government making money off of lending money to young people" who want an education.

At the earlier event, Clinton also called for connecting every household to high-speed internet by 2020 and training 50,000 new computer science teachers.

She spent time chatting with one startup that created an internet platform for commodity sellers in East Africa, talking about how hard it is for subsistence farmers to survive when they don't know what price they can fetch for their crops.

Clinton also took a swipe at her likely Republican opponent, Donald Trump, by quoting his slogan "Make American Great Again." She called it "code for saying you want to go back to what it used to be....That is not who we are as Americans. We don't want to go back — we go forward."