The crack released about 101.5 million cubic feet of natural gas that ignited.

On August 1, 2019, a 30-inch Enbridge natural gas pipeline near Danville, Kentucky, ruptured. The gas ignited, the pipeline exploded, 30 acres of land were torched, 14 homes were damaged, five houses were completely destroyed, and one person was killed.

The crack released about 101.5 million cubic feet of natural gas that ignited. The blast launched a 33.2-foot-long section of pipeline that landed some 481 feet away. More than 75 people had to be evacuated, and six others were injured.

This week, the National Transportation Safety Board said the accident could be traced back to a manufacturing defect and ineffective cathodic protection. Cathodic protection is an electrochemical method to prevent corrosion on buried pipelines where the applied coating has been damaged, and the bare pipeline metal is exposed to the soil.

Investigators said a pre-existing manufacturing defect, known as a hard spot, combined with a degraded pipeline coating and ineffective cathodic protection, led to hydrogen-induced cracking at the outer surface of the pipe.

According to the NTSB, Enbridge's integrity management program failed to assess the pipeline's condition accurately or estimate the risk from interacting threats. Enbridge underestimated the risk posed by hard spots because its processes and procedures were inconsistent with industry knowledge.

Enbridge had actually increased cathodic protection voltages on the affected pipeline segment to compensate for the increased external corrosion. Buried steel pipelines corrode because of moisture and groundwater in the soil.

The pipe was manufactured in 1957 to the American Petroleum Institute pipeline standards that were in use at the time. In the '50s, the standards didn't specify rejectable criteria for a hard spot. By current standards, the hard spot would have been rejected due to its size and hardness. 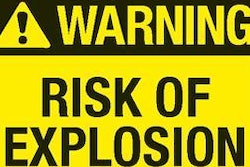 Pipeline has History of Deadly Accidents