Federal investigators released hundreds of files related to the probe of the 2019 explosion.

LOUISVILLE, Ky. (AP) — Heat from a deadly gas pipeline explosion in Kentucky burned so hot it melted the siding on a home 1,100 feet (about 355 meters) away, according to a federal investigation.

The rupture of the 30-inch-width regional gas pipeline in August 2019 in Lincoln County killed a woman and sent five others to the hospital. The National Transportation Safety Board, which is investigating the blast, released hundreds of files related to the investigation this week.

The NTSB said a probable cause determination of the explosion would be issued in a final report at a later date.

The pipeline is operated by Canadian-based Enbridge Inc. The explosion scorched the ground around the pipeline, destroyed five homes and burned about 30 acres of land. The flame was visible at least 38 miles (about 61 kilometers) away from the accident site, the NTSB said.

The heat from the blast killed 58-year-old Lisa Denise Derringer. Five other people suffered minor burns and smoke inhalation, according to the NTSB documents. State police investigators said at the time that Derringer may have seen or heard the explosion and tried to flee.

The high heat kept police officers from initially recovering Derringer's body, which was lying several hundred feet away from the site of the blast.

A deputy sheriff who discovered the body had to turn away because of the intense heat. Her body was later recovered by officers who had to don fire protection garments, the report said.

It took hours for firefighters to douse the flames, with trucks repeatedly refilling their tanks and returning to the scene.

The NTSB said about 3,600 pages of documents about the blast are in the docket that was released online this week.

Enbridge pipelines carry about one-quarter of the crude oil produced in North America and one-fifth of the natural gas used in the U.S. Several of its pipelines have been the subjects of lengthy legal and political fights and two of the largest inland oil spills in U.S. history.

One of those spills, a 2010 release of more than 1 million gallons of sludgy tar sand soil into a Michigan creek polluted a nearly 40-mile stretch of the Kalamazoo River. The Environmental Protection Agency described it as the most expensive inland oil spill in U.S. history, with a four-year cleanup costing more than $1 billion. 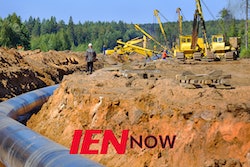