The segment is part of Enbridge's sprawling Lakehead pipeline network, which transports oil and liquid natural gas to markets in the U.S. Midwest, East Coast and eastern Canada. 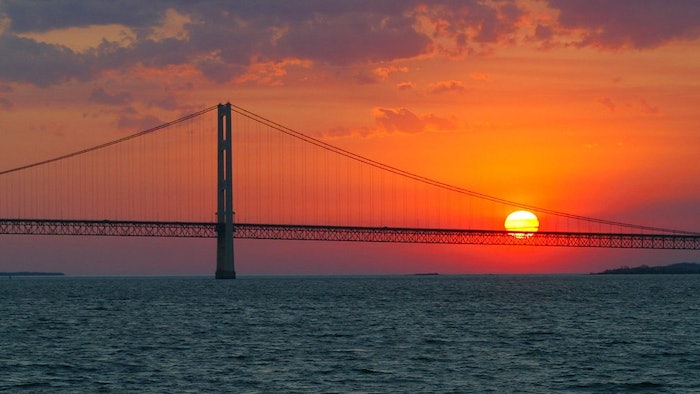 In this May 31, 2002 file photo, the sun sets over the Mackinac Bridge and the Mackinac Straits as seen from Lake Huron. The bridge is the dividing line between Lake Michigan to the west and Lake Huron to the east. Michigan's attorney general, Republican Bill Schuette, called Thursday, June 29, 2017 for shutting down the nearly 5-mile-long (8-kilometer-long) section of Enbridge Inc.'s Line 5 under the Straits of Mackinac.
AP Photo/Al Goldis, File

TRAVERSE CITY, Mich. (AP) — Michigan's attorney general on Thursday called for shutting down twin oil pipelines beneath the waterway where Lakes Huron and Michigan meet, as the state released a consultant's report outlining alternative scenarios for the future of oil transport in the ecologically sensitive tourist destination.

Republican Bill Schuette said a "specific and definite timetable" should be established for decommissioning the nearly 5-mile-long (8-kilometer-long) section of Enbridge Inc.'s Line 5 in the Straits of Mackinac, which environmental groups want removed but the Canadian pipeline company insists is in good shape.

"The safety and security of our Great Lakes is etched in the DNA of every Michigan resident," Schuette said, adding that "the final decision on Line 5 needs to include a discussion with those that rely on propane for heating their homes, and depend on the pipeline for employment."

The segment is part of Enbridge's sprawling Lakehead pipeline network, which transports oil and liquid natural gas to markets in the U.S. Midwest, East Coast and eastern Canada. Line 5 runs underground from Superior, Wisconsin, across Michigan's Upper Peninsula to the straits area, where it divides into two 20-inch pipes that rest on the lake floor. It continues south through the state's Lower Peninsula to Sarnia, Ontario, carrying about 23 million gallons (87 million liters) of light crude oil and liquid natural gas daily.

Enbridge, based in Calgary, Alberta, says the pipeline delivers crucial supplies of oil for gasoline, propane and other refined products and is closely monitored.

"After more than 60 years in service, Line 5 is in outstanding operating condition because the rigorous maintenance done through the decades," said John Gauderman, director of operations for the Great Lakes region. "We intend to keep it that way."

Critics say the underwater section of Line 5, in place since 1953, has been buffeted by strong currents and shows signs of wear. They note that Enbridge offered similar assurances before another of its pipelines ruptured in southern Michigan in 2010, fouling the Kalamazoo River in one of the nation's largest inland oil spills.

Schuette said in a news release that he "strongly disagrees" with a suggestion in the report by the engineering consulting firm Dynamic Risk Assessment Systems Inc. that Line 5 could operate indefinitely.

Environmental activists said the attorney general, who is expected to run for governor next year and has said previously that Line 5's "days are certainly numbered," should prove he means business by ordering a shutdown. Although the federal government regulates oil pipelines, Michigan owns the straits area Great Lakes bottomlands and could revoke an easement it granted to Enbridge when Line 5 was installed, said Liz Kirkwood, executive director of a group called For Love of Water.

"He has the authority to act now and we want him to act now," said David Holtz, chairman of the Sierra Club's Michigan chapter.

The Michigan League of Conservation Voters dismissed Schuette's statement as "hollow posturing" and urged Republican Gov. Rick Snyder to "finally put Line 5 out of service." The Michigan Chamber of Commerce said the pipeline was important to the state's economy and its fate shouldn't be determined by "bumper stickers or emotional political appeals."

State agencies considering what to do about Line 5 commissioned two reports from separate consulting firms, one analyzing risks posed by the existing situation and the other focusing on future option. Enbridge covered the more than $3 million cost. Officials announced last week that the state had canceled the nearly-finished risk analysis after discovering a conflict of interest involving one of the firm's employees.

The Dynamic Risk Assessment Systems report released Thursday lists six alternatives, including continuing the Line 5 segment's current operations or shutting it down. Others include building a new pipeline through Wisconsin, Illinois, Indiana and Michigan that wouldn't cross open Great Lakes waters; moving Line 5's oil through other existing pipelines; using surface oil transport methods such as rail cars, trucks or barges; and putting new pipelines in the straits that would run through a trench or tunnel.

The report doesn't endorse a particular alternative but analyzes each for technical and cost feasibility. It also assesses the condition of the existing pipelines and possible outcomes of oil spills in the area.

Enbridge said it needed more time to study the 337-page report before commenting, while environmental groups said it was too friendly toward the company's position.

It describes truck and ship transport as impractical and says a more southerly pipeline would cost around $2 billion while posing significant environmental and economic hazards. The tunnel or trench options would be much less expensive, it says, and simply shutting down Line 5 would boost gasoline and propane prices statewide.

A final version will be issued this fall after several public information and comment sessions.