The U.S. share of the global aluminum market has dropped from a world-beating 16 percent in 2000 to less than 2 percent last year. 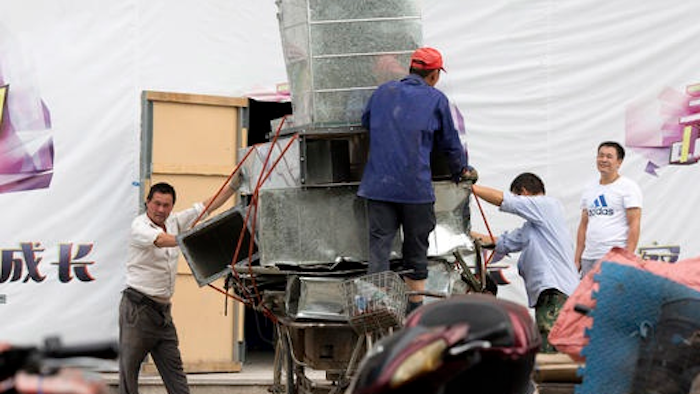 Workers remove air ducts made from aluminum sheet metal in Beijing, China. In September, China’s leaders promised to rein in aluminum production that is flooding global markets and threatening jobs in the United States and Europe. Since then the industry has found its way into the crosshairs of the Trump administration.
AP file

Commerce Secretary Wilbur Ross said the president will sign a memo ordering him to determine the impact of rising aluminum imports. High-purity aluminum is used in a number of defense applications, including military planes and the armor-plating of military vehicles.

Ross said that, thanks to steep competition from overseas, there is only one American smelter that produces high-purity, aerospace-quality aluminum still in operation.

"It's very, very dangerous, obviously from a national defense point of view, to only have one supplier of an absolutely critical material," he told reporters at a White House briefing Wednesday evening.

The move, which could lead to tariffs on aluminum imports, is the second such investigation the president has initiated. Last week, he asked Ross to look into steel imports to determine whether they, too, pose a national security risk.

"This is not an area where we can afford to become dependent on other countries," Trump said then.

U.S. aluminum producers have been hurt badly by China's astonishing rise in the industry. Since 2000, China has increased its share of the world aluminum market from less than 11 percent to nearly 53 percent, increasing production almost 12-fold.

Meanwhile, in the United States, aluminum plants have shuttered and production has dropped 77 percent over the same period as aluminum prices plunged in the face of the onslaught from China. The U.S. share of the global market has dropped from a world-beating 16 percent in 2000 to less than 2 percent last year.

Trump has declined to fulfill his campaign promise to label China a currency manipulator as he leans on the country for help in neutralizing the threat posed by North Korea's missile program.

But Ross said the aluminum action should not be seen as an attack on China. "This is not a kind of China-phobic program. This has to do with a global problem," he said.

Aluminum-exporting countries might retaliate by imposing tariffs of their own on U.S. products, warned the law firm White & Case, which put out a report in January on the president's legal powers to restrict foreign trade. About 60 percent of U.S. aluminum imports come from Canada, which has been forced out of other markets by competition from China.

"Citing a threat to national security gives them a way they can impose tariffs, arguably, without violating WTO rules," said Amanda DeBusk, a partner and trade specialist at the law firm of Hughes Hubbard & Reed. The World Trade Organization "lets countries define what they believe is in their national security interest."

Ross said the move was part of Trump fulfilling his campaign promise to crack down on trade abuses.