The city's mayor said the opioid crisis has overwhelmed the city's resources, stretching everyone from first responders to park crews who clean up discarded syringes. 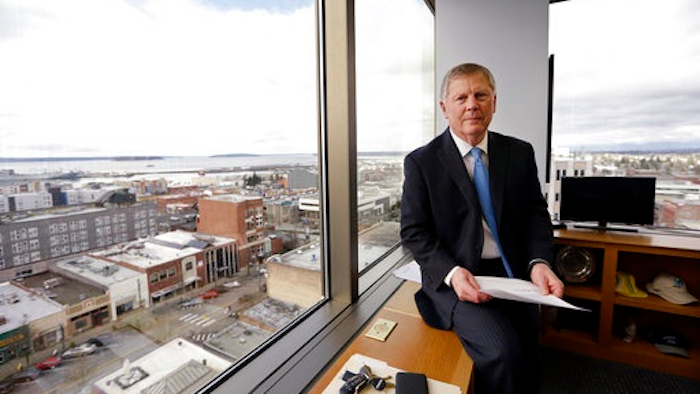 In this Feb. 16, 2017, file photo, Everett Mayor Ray Stephanson sits in his corner office overlooking downtown Everett, Wash. Stephanson is suing pharmaceutical giant Purdue Pharma, becoming the first city to try to hold the maker of OxyContin accountable for damages to his community. Connecticut-based Purdue Pharma argued in court documents filed Monday, March 20, 2017, there is no legal basis for such a lawsuit.
AP Photo/Elaine Thompson, file

SEATTLE (AP) — The maker of the pain medication OxyContin has asked a federal judge in Seattle to throw out a Washington city's lawsuit that seeks to hold the drugmaker responsible for allowing its pills to flood the black market and into Everett.

Purdue Pharma argued in court documents filed Monday that there is no basis in law for a municipality to bring such an action against a pharmaceutical manufacturer.

Everett, a city of about 108,000 north of Seattle, sued the Connecticut-based company in January seeking to hold it accountable for the social and economic damages to the community due to illegal trafficking of the powerful painkillers. The city alleged that Purdue knowingly allowed pills to be funneled into the black market and into the city and did nothing to stop it.

The city's lawsuit which accuses Purdue of gross negligence and nuisance was initially filed in state court but has moved to federal court in Seattle.

Purdue makes several arguments in asking U.S. District Judge Ricardo S. Martinez to dismiss all claims. It contends that the city's claim that Purdue failed to report suspicious flows to authorities isn't reasonable given other court filings that demonstrate law enforcement knew and was already investigating criminal trafficking at issue. Purdue also maintains that it did not breach any legal duty to the city and that the city does not have standing to make claims based on a consent judgment that the company entered into with the state of Washington.

In 2007, Purdue settled with Washington and other states that claimed the company aggressively marketed OxyContin to doctors while downplaying the addiction risk. As part of that settlement, the company agreed to continue an internal program to identify potential diversion or abuse.

Purdue also says that the lawsuit should be dismissed because the city hasn't brought a claim that shows a direct relationship between the company's conduct and the alleged harms it outlined.

"We look forward to presenting our arguments to the Court refuting Purdue's position," the city of Everett said in an emailed statement Tuesday afternoon. "The City remains committed to holding Purdue accountable for allowing OxyContin to be funneled into the black market, causing the current opioid crisis in Everett."

Mayor Ray Stephanson previously said he thinks the city has a strong case.

"We wouldn't have followed this lawsuit if we didn't believe we could prevail," he said in an interview last month. "We believe our case is strong and we believe our arguments will be convincing."

Stephanson said the opioid crisis caused by "Purdue's drive for profit" has overwhelmed the city's resources, stretching everyone from first responders to park crews who clean up discarded syringes. He said the community has been significantly damaged and should be made whole.