The deficit in January rose 9.6 percent to $48.5 billion, up from a December deficit of $44.3 billion, the Commerce Department reported Tuesday. 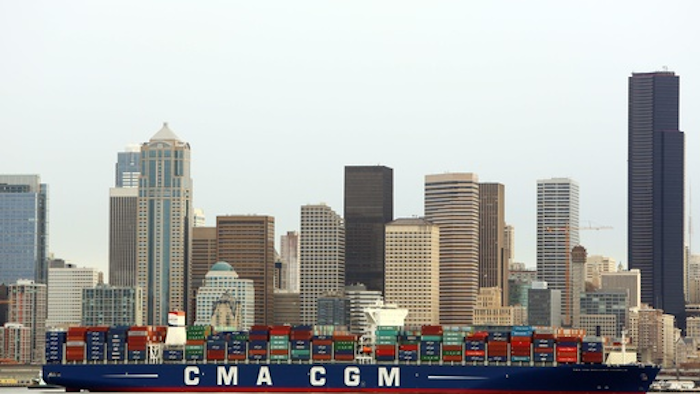 WASHINGTON (AP) — The U.S. trade deficit jumped in January to the highest level in nearly five years as a flood of mobile phones and other consumer products widened America's trade gap with China. The result underscores the challenges facing President Donald Trump in fulfilling a campaign pledge to reduce America's trade deficits.

The deficit in January rose 9.6 percent to $48.5 billion, up from a December deficit of $44.3 billion, the Commerce Department reported Tuesday. It was the largest monthly gap since a deficit of $50.2 billion in March 2012.

U.S. exports edged up a slight 0.6 percent to $192.1 billion, helped by stronger auto sales. But that was swamped by a 2.3 percent surge in imports to $240.6 billion, led by mobile phones, oil and foreign-made cars.

During the campaign, Trump pledged to attack America's persistent trade deficits, which he blamed for the loss of millions of good-paying factory jobs. He has threatened to slap punitive tariffs on imports from China, Mexico and other nations he has accused of trading unfairly. But economists worry that Trump's tough talk could spark all-out trade wars in which foreign nations retaliate by boosting their tariffs on American goods.

For January, the U.S. deficit with China increased 12.8 percent to $31.3 billion, the highest level since September. The figure reflects a big rise in imports of mobile phones, clothing, televisions, toys and games.

American exporters have struggled over the past two years as a rising dollar has made their goods more expensive and therefore less competitive in overseas markets.

Economists believe if the dollar stabilizes this year, export growth should rebound, reflecting in part stronger economic growth in many of America's major export markets.

Andrew Hunter, U.S. economist for Capital Economics, said that the big increase in the deficit in January likely signals that trade will drag overall growth in the first quarter. But he said the impact wouldn't be as severe as in the fourth quarter, when trade trimmed growth by 1.7 percentage points.

And brighter days may be ahead.

"With the headwind from the dollar's prior appreciation having eased and global growth picking up quite sharply, the outlook for exports is better now than it has been in some time," Hunter said.

The trade deficit is the difference between imports and exports. A rising deficit is a drag on overall economic growth because it means more products are being produced for domestic consumption from overseas.

The trade deficit is expected to trim overall economic growth by around one-half percentage point this year. Many economists are looking for the U.S. economy to grow between 2 percent to 2.5 percent in 2017, up from anemic 1.6 percent growth in 2016.