The trade deficit — the gap between what America sells and what it buys abroad — has risen for five straight months. 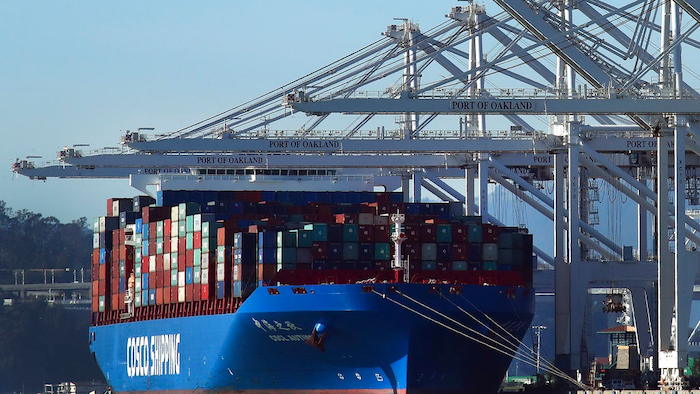 In this Jan. 30, 2018, file photo, a container ship waits to be unloaded at the Port of Oakland in Oakland, Calif. The Commerce Department reports on the U.S. trade gap for January, on Wednesday, March 7.
AP Photo/Ben Margot, File

WASHINGTON (AP) — The U.S. trade deficit rose in January to the highest level since October 2008, defying President Donald Trump's efforts to bring more balance to America's trade with the rest of the world.

The Commerce Department said Wednesday that the trade deficit rose to $56.6 billion in January, up 5 percent from $53.9 billion in December and the highest since October 2008's $60.2 billion trade gap. The trade deficit — the gap between what America sells and what it buys abroad — has risen for five straight months.

Trump rattled financial markets last week by promising to slap big tariffs on imported steel and aluminum. He blames persistent deficits on abusive practices by U.S. trading partners and on bad trade deals that put American companies at a disadvantage or encourage them to move factories overseas.

The United States ran a $76.5 billion deficit in the trade of goods, which was partially offset by a $19.9 billion surplus in services such as education and banking.

The $36 billion January deficit with China was the highest since September 2015. The trade gap with Mexico narrowed to $4.1 billion from $5.4 billion in December.

Trump upset America's allies last week by vowing to slap tariffs of 25 percent on imported steel and 10 percent on aluminum. Europe has threatened to retaliate with sanctions on U.S. exports of blue jeans, bourbon and Harley-Davidson motorcycles, raising the risk of a potentially destructive trade war.

"He is not afraid of getting into a trade war although that is not what we want," Treasury Steven Mnuchin said in an interview Wednesday on the Fox Business Network. "We are just looking for fair and reciprocal trade."

Trump is also demanding a rewrite of the 1994 North American Free Trade Agreement with Mexico and Canada in an attempt to reduce the U.S. trade deficit with Mexico and to shift more auto production north of the border.

The president views trade deficits as a sign of economic weakness and as the result of unfair practices by America's trading partners. Most economists say they are caused by bigger economic forces, mainly the fact that the United States consistently spends more than it produces.

The trade gap has continued to rise since Trump entered the White House partly because the U.S. economy is strong and American consumers have an appetite for imported products and the confidence to buy them.