"I hope that over the next few years, people will learn that Bayer is more than aspirin," said Phil Blake, Bayer's U.S. president. 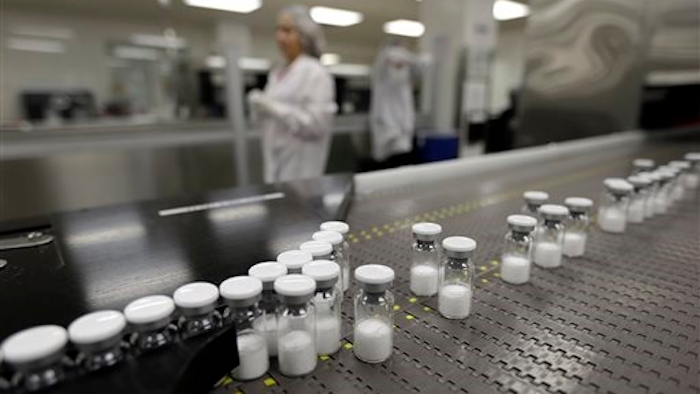 vials of the drug Kogenate FS, a medicine used to replace the clotting factor missing in people with hemophilia, move along an automated packaging line at Bayer Corporation labs in Berkeley, Calif. Bayer is increasing everything from marketing and research operations in the U.S. to the number of its nonprescription medicines in pharmacies and grocery stores.
AP Photo/Ben Margot

WHIPPANY, N.J. (AP) -- The German conglomerate that invented aspirin over a century ago wants to take over much more of your medicine cabinet.

Bayer AG is boosting its presence and brand in the U.S., the world's biggest medicine market. Bayer is increasing everything from marketing and research operations in the U.S. to the number of its nonprescription medicines in pharmacies and grocery stores.

The U.S. expansion is part of the 153-year-old company's transformation from a chemical-and-dye manufacturer, a business it spun off last year, to a pure "life sciences" company focused on the health of people, pets and plants.

"I hope that over the next few years, people will learn that Bayer is more than aspirin," Phil Blake, Bayer's U.S. president and head of pharmaceuticals for the Americas, said in an interview at its U.S. headquarters in Whippany, New Jersey.

Bayer's strategy is a departure in an industry in which companies typically swim together in the same direction. Bayer is focused on expanding in the U.S., while other top drugmakers are concentrating on increasing sales and manufacturing in Asia and other developing markets.

"The U.S. is the most important country for Bayer," said global innovation chief Kemal Malik.

Bayer, based in Leverkusen, Germany, boosted its research budget last year 21 percent to $4.7 billion. And it's doing more in two areas rivals have mostly abandoned despite huge unmet need and millions of patients: heart disease and women's health.

Bayer is doing more research collaborations in the U.S., like its deal with Johns Hopkins University to develop medicines for vision-damaging diseases. It also has a partnership with Massachusetts startup CRISPR Therapeutics, to develop new therapies for blood disorders, blindness and other conditions.

Across the U.S., Bayer has been hiring hundreds of scientists, factory workers and salespeople, and enlarging or building new research labs, offices and medicine factories.

It funds a San Francisco "incubator" housing startups developing experimental medicines and related technology. And it's pouring $1 billion into new greenhouses, factories for crop-protecting chemicals and development of seeds that can withstand climate change.

A key part of Bayer's U.S. strategy is expanding its consumer health business.

That's been driven by its 2014 purchase of Merck & Co.'s consumer health unit for $14.2 billion. The combined business vaulted to No. 1 in U.S. consumer health sales, surpassing Johnson & Johnson.

Pain relievers and vitamins aren't sexy, but they have appeal: Development costs are low, advertising can quickly boost sales, products attract few lawsuits compared to prescription drugs, and they sell steadily for decades.

Bayer is a leader in women's health, selling Yaz, Yasmin and other birth control pills; Mirena and other intrauterine devices, and Essure, an implant for permanently preventing pregnancy. Last month, U.S. regulators required that Essure bear its strictest warning, noting chronic pain and bleeding in some users, and ordered Bayer to conduct new safety studies.

It has recently become a contender in cancer medicines, jumping from one a decade ago to three today, with two dozen more in patient testing, innovation chief Malik said. Meanwhile, under a new partnership with the American Association for Cancer Research, Bayer will give U.S. scientists grants to transform ideas for new cancer targets into medicines.

"We have a lot of upside potential," said Dekkers, who retires on May 1 and will be succeeded by Bayer's strategy chief, Werner Baumann.

To lift its profile among U.S. consumers, Bayer boosted its marketing and social media efforts.

It's been running TV ads for 17 consumer brands, double its 2010 total. It's offering discount coupons online and in newspapers. And it's put the Bayer cross logo, previously reserved for its aspirin, on all products.

Bayer has doubled its social media staff, started an Instagram page, added U.S. content to its Facebook page and increased its Twitter posts sevenfold, with product and other news, quizzes and links to sites offering product coupons and tips on related disorders.

It's also creating new products just for the U.S., like TruBiotics immune supplement and Aleve PM, and over-the-counter versions of some prescription drugs.

"They're more likely to have a bright future by doing this than not," Gordon predicts.