An April fire and explosion at a massive battery west of Phoenix sent eight firefighters and a police officer to the hospital. 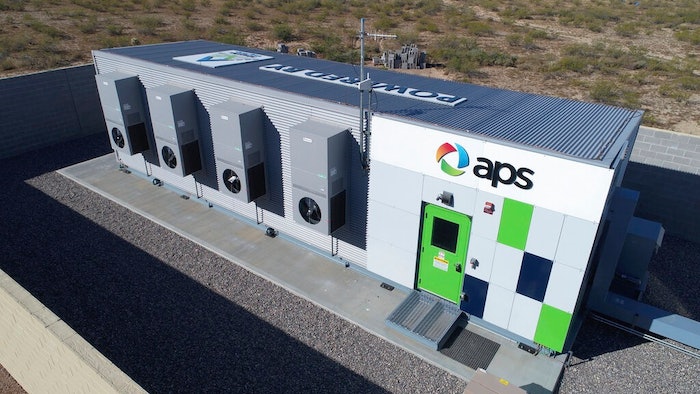 PHOENIX (AP) — Arizona's largest electric company installed massive batteries near neighborhoods with a large number of solar panels, hoping to capture some of the energy from the afternoon sun to use after dark.

Arizona Public Service has been an early adopter of battery storage technology seen as critical for the wider deployment of renewable energy and for a more resilient power grid.

But an April fire and explosion at a massive battery west of Phoenix that sent eight firefighters and a police officer to the hospital highlighted the challenges and risks that can arise as utilities prepare for the exponential growth of the technology.

With an investigation ongoing and no public word on the fire's cause, the incident is being closely watched by energy storage researchers and advocates.

"This is getting attention, and I think everyone realizes that too many safety incidents ... will be detrimental going forward," said George Crabtree, director of the Joint Center for Energy Storage Research, a partnership of national laboratories, universities and companies funded by the U.S. Energy Department. "So I think it's being taken very seriously."

APS has assembled a team of engineers, safety experts and first responders to work with the utility, battery-maker Fluence and others to carefully remove and inspect the 378 modules that comprise the McMicken battery system and figure out what happened.

APS installed the 2 megawatt battery systems at a substation in Surprise, outside Phoenix, in 2017 and another near the Festival Ranch development in nearby Buckeye. They help the utility manage fluctuations from clouds or the setting sun in areas with a large number of rooftop solar panels.

Those batteries are tiny in comparison to the 850 megawatts that APS has pledged to build by 2025. Energy storage, and batteries in particular, are projected to take off as renewable energy prices come down and states mandate a growing share of power must come from renewables like wind and solar, which are subject to the whims of Mother Nature.

On the current electric grid, energy is used as it's generated; the supply and demand must match, or customers will face blackouts or power surges.

At times, California produces so much solar energy that its utilities pay APS to take it off the grid. New solar farms are planned in Arizona and elsewhere in the West. Storing energy allows utilities to better manage peaks and valleys.

"Absent battery storage, the whole value proposition of intermittent renewable energy makes no sense at all," said Donald Sadoway, a battery researcher at Massachusetts Institute of Technology and co-founder of battery storage company Ambri. "People just don't understand that the battery will do for electricity what refrigeration did to our food supply."

Utilities can capture solar energy in the afternoon when power is cheap, and sell it in the evening when demand and prices rise. They also can replace the need for natural gas "peaker plants" that fire up to meet peak energy demand, or delay building expensive new transmission lines.

California and Hawaii have set goals of eliminating fossil fuels from their energy grids in the coming decades, and many states are expanding mandates for a portion of energy to come from renewable sources.

Nearly all of the utility-scale batteries now on the grid or in development are massive versions the same lithium ion technology that powers cellphones and laptops. If the batteries get too hot, a fire can start and trigger a phenomenon known as thermal runaway, in which the fire feeds on itself and is nearly impossible to stop until it consumes all the available fuel.

"Anytime you store a lot of energy in a small space you've got to be very cognizant of the controls that you have to put in place so that energy doesn't get out when you don't want it to," said Jay Apt, co-director of Carnegie Mellon University's Electricity Industry Center.

Researchers are working to educate firefighters on how to deal with battery fires. It was a topic of discussion at a conference this week of the National Fire Protection Association, which has developed an online training program for first responders, said Christian Dubay, the group's vice president and chief engineer.

"When you face a unique hazard, you need to have awareness and training for that," Dubay said.

The APS fire was the third involving a utility-scale battery. One was at an APS-owned battery in Flagstaff in 2012, and the other was in Hawaii.

APS has shut down its two similar batteries while awaiting the investigation's results, but the utility is not slowing down its plans to deploy new massive batteries, said Alan Bunnell, a company spokesman.

"We believe energy storage is vital to a clean energy future here in Arizona," Bunnell said.