Energy storage could transform the way American homeowners, businesses and utilities produce and use power. 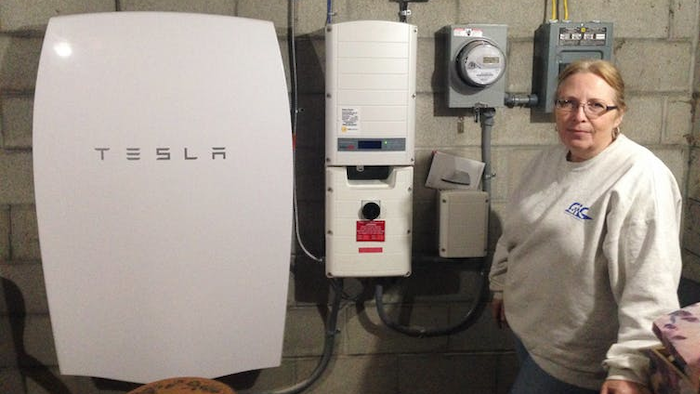 The market for energy storage on the power grid is growing at a rapid clip, driven by declining prices and supportive government policies.

Based on our research on the operation and costs of electricity grids, especially the benefits of new technologies, we are confident energy storage could transform the way American homeowners, businesses and utilities produce and use power.

Energy storage in this context simply means saving electricity for later use. It’s like having a bunch of rechargeable batteries, but much larger than the ones in your cellphone and probably connected to the grid.

After annual average growth of about 50 percent for five years, the U.S. electricity industry installed a total of 1 gigawatt-hour of new storage capacity between 2013 and 2017, according to the firm GTM Research. That’s enough to power 16 million laptops for several hours. While this amount of storage is less than 0.2 percent of the average amount of electricity the U.S. consumes, analysts predict that installations will double between 2017 and 2018 and then keep expanding rapidly in the U.S. and around the world.

To see why this trend is a big deal, consider how electricity works.

It takes a hidden world of complexity and a series of delicate balancing acts to power homes and workplaces because the grid has historically had little storage capacity. After being generated at power plants, electricity usually travels down power lines at the speed of light and most of it is consumed immediately.

Without the means to store electricity, utilities have to produce just enough to meet demand around the clock, including peak hours.

That makes electricity different from most industries. Just imagine what would happen if automakers had to do this. The moment you bought a car, a worker would have to drive it out the factory gate. Assembly lines would constantly speed up and slow down based on consumer whims.

It sounds maddening and ridiculous, right? But electric grid operators basically pull this off, balancing supply and demand every few seconds by turning power plants on and off.

That’s why a storage boom would make a big difference. Storage creates the equivalent of a warehouse to stow electricity when it is plentiful for other times when it is needed.

Energy storage can help in a variety of ways, essentially serving as a Swiss Army knife for electricity grids. It can help balance short-term power fluctuations, manage peak demand or act as a backup to prevent or recover from power outages.

And it can be deployed at any scale and at any point in the grid, from a small home storage system to a pumped hydroelectric reservoir big enough to power a small city. While storage actually consumes a little electricity rather than producing any, it makes the electricity business more economically efficient. As the volume of storage grows, we expect grids to become more stable and flexible.

Storage may also make a big difference with electricity generated through solar or wind power – which can only be harnessed when the sun is shining and the wind is blowing.

But, in general, it isn’t necessary for that purpose yet. While those industries are growing quickly, wind power generates only about 6 percent of U.S. electricity and solar less than 2 percent. Electricity grids can currently use almost all of that power as it is produced.

Grid operators, accustomed to managing the variable supply and demand for power, can manage the extra unpredictability they get from wind and solar energy now. But as utilities, businesses and consumers bring more renewable energy online, the grid may become harder to balance without additional storage.

To be sure, hydroelectric plant operators have been storing power for a long time. The U.S. has the capacity to store some 22 gigawatts in pumped hydropower, about 2 percent of U.S. generating capacity. Yet its reliance on large water reservoirs, which can’t be easily constructed near power markets, limits the growth potential of this energy option.

Once energy storage scales up, utilities will meet peak demand more easily with less total capacity and fewer power plants. If they can rely on storage to supply power during high-demand hours instead of building new power plants, it can save money all around.

But storage isn’t the only game in town – other technologies offer similar benefits. Utilities can install new transmission lines or rely on flexible natural gas, which is essentially the biggest competitor for energy storage.

Natural gas generation produces about a third of the nation’s electricity today and provides many of the same benefits as storage since these power plants are easy to switch on and off. The relatively low prices for natural gas, less than half of what they were a decade ago due to widespread hydrofracking, have probably slowed energy storage growth until now.

Natural gas has become increasingly popular for power generation, displacing demand for coalsince 2000. But if storage gets cheap enough, this equation may flip and storage could threaten the economics of natural gas generation.

Help from the Government and Better Batteries

One reason why this industry is growing is that it’s getting a boost from the government.

California, Maryland, New Jersey and Nevada are subsidizing storage, mandating its adoption or both. A similar measure is pending in Hawaii’s legislature.

And despite the Trump administration’s efforts to maximize fossil fuel extraction, the federal government is now laying the regulatory groundwork for the storage industry to compete directly in open wholesale energy markets for the first time.

Improvements in technology have made a difference, too. Battery technology, led by the same lithium-ion design that powers mobile phones, is making big strides and getting much cheaper.

Lithium-ion batteries are both responsible for most of this new wave of grid-connected energy storage and the critical component inside the rapidly growing number of American electric vehicles. For example, the lithium-ion battery used in the the Tesla Powerwall, a home battery system, is the same as the one the company uses in its vehicles.

Grid-scale lithium batteries often differ from those in cars but use the same basic technology. The price of utility-scale lithium-ion battery systems fell 40 percent in just five years to around US$1,200 per kilowatt-hour in 2015 from roughly $2,100 in 2010 and are expected to continue falling.

The grid currently has relatively little storage for the same reason that only about 200,000of the 17.2 million vehicles Americans bought in 2017 were electric: It’s expensive today.

Electric vehicles do not yet save money for most U.S. drivers. But market experts project that electric vehicles ownership will cost less than standard vehicles powered by gasoline within a decade and continue getting cheaper after that.

Likewise, for the electricity grid, if storage gets cheap enough, its potential market could expand from 1 gigawatt-hour to dozens or even hundreds of gigawatt-hours.

If or when that happens, wind and solar power would become more competitive, increasingly displacing both coal and natural gas – now the nation’s two top sources of electric power. And this cheaper storage would also make electric vehicles more affordable, reducing the amount of gasoline and diesel Americans consume. The electricity and automotive industries operate nearly the same way they did 50 years ago. But a world of low-cost batteries would change them both in exciting and unprecedented ways.

No matter what happens, we believe that storage is “future-proof” because it works well on the current grid and with a wide variety of other technologies. If the wind and solar industries keep up their current momentum (and they probably will), storage will become even more valuable. But if the grid goes another direction – relying more on large and expensive generation plants, for example – storage would make it easier to manage peak demand without surplus capacity. Even if we can’t say exactly what the grid of the future will look like, we are pretty confident that storage will keep it humming in new ways.