There are no air-quality problems despite a huge black plume of smoke that could be seen for miles. 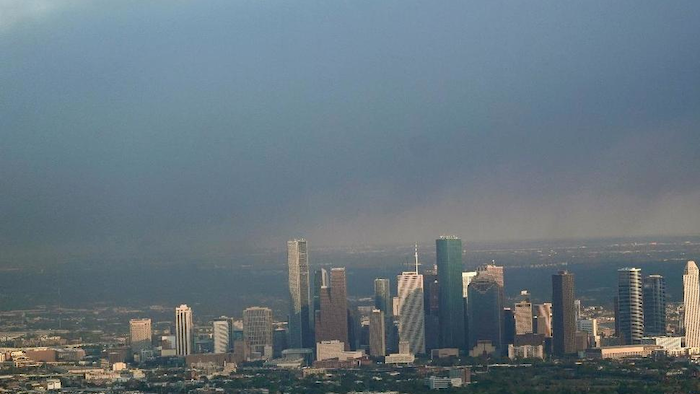 A plume of smoke from a petrochemical fire at the Intercontinental Terminals Company is shown over downtown Houston Monday, March 18, 2019. The large fire at the Houston-area petrochemicals terminal will likely burn for another two days, authorities said Monday, noting that air quality around the facility was testing within normal guidelines.
AP Photo/David J. Phillip

Houston authorities on Tuesday assured residents that there were no measureable air-quality problems from a petrochemical storage terminal fire despite a huge black plume of smoke that could be seen for miles.

The fire began Sunday at the International Terminals Co. in the suburb of Deer Park, southeast of Houston, and officials said it is uncertain how long it will burn.

Here is a look at the situation:

Q: Why are residents being told it's safe?

A: The plume of smoke extended above 4,000 feet (1,219 meters) on Tuesday and was being carried away on the wind, so most of the chemicals and fine particles released or generated by the fire are not affecting the surrounding neighborhoods, said Harris County Judge Lina Hidalgo, the county's top administrator. A private company hired by ITC, Center for Toxicology and Environmental Health, said monitors in the neighborhoods found no abnormal readings.

Monitoring conducted by the Texas Commission on Environmental Quality and the Environmental Protection Agency also reported nothing alarming, officials at those agencies said.

The Environmental Defense Fund, an advocacy group, said it also would undertake its own monitoring.

The biggest concern will be pollutant concentrations when and where the plume eventually makes contact with the ground, said Chris Frey, an air pollution expert and environmental engineering professor at North Carolina State University who was not involved in the response. He said the concentrations likely will decrease as the plume disperses and some of the chemicals degrade.

It's not an ideal situation when chemicals are burning outdoors, but "If the plume is dispersing and being carried by the wind ... it does mean that concentrations are going to be substantially diluted," Frey said. "For someone 50 miles away, there probably is no discernable (risk)."

Q: Should anyone be worried?

A: The greatest potential risk could be from particles produced by the fire, experts said. Residents have reported seeing ash in their neighborhoods, which officials say can be washed away.

But smaller particles can be breathed in and cause respiratory problems. The tiniest particles, which can be seen only under a microscope, can lodge deep in the lungs and enter the bloodstream, causing lung and heart problems.

The company and the county also are monitoring for those particles and say they've found no levels of concern so far. But fog is forecast for the area Wednesday morning, which could drag the plume downward and make air quality worse, officials said.

Health experts say people with cardiac and respiratory problems, including asthma, and the elderly and pregnant women should take extra precautions, including limiting their time outdoors. Dr. Umair Shah, head of Harris County Public Health, also says anyone who experiences symptoms such as coughing, difficulty breathing and irritation to the skin, eyes, nose and throat should contact a doctor.

Neil Carman, a former refinery inspector for the Texas Commission on Environmental Quality and now a clean air advocate with the Sierra Club, said some of the chemicals that come down could be unburned and new chemicals could have been formed during combustion.

"I would tell (people) to go inside or leave the area," he said.

Q: What were they testing for?

A: Center for Toxicology and Environmental Health tested dozens of locations for chemicals that included benzene, naphtha, toluene and xylene, as well as volatile organic compounds and microscopic particles. Officials said they made sure that hand-held monitors were at the same level as people breathe.

Only particles and VOCs were detected, they said, but none at levels of concern.

Most of the chemicals in the burning storage tanks contained components of gasoline, including naphtha and xylene, ITC officials said. Another contained toluene, often used in nail polish remover and paint thinner.

Q: What will happen now?

A: Hidalgo said monitors will be moved to any other areas of concern as the fire continues to burn and the plume moves.

"We're sharing information with the public so that everybody knows what we know, what we're doing and where we're headed," Hidalgo said. "We're prepared for any contingency."

No Timetable for End to Fire