National Guard troops have been called in and residents are being told to stay inside. 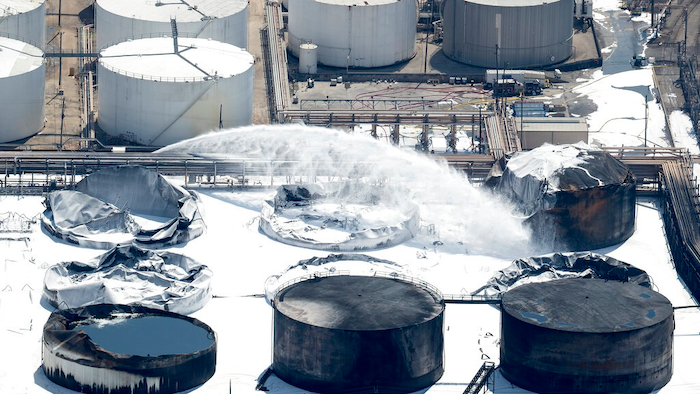 Emergency crews continue to douse what's left of the now-extinguished petrochemical tank fire at Intercontinental Terminals Company on Wednesday, March 20, 2019, in Deer Park. Fire crews extinguished the blaze at ITC about 3 a.m., Wednesday, almost four days after it started, which caused a plume of black smoke to linger over the Houston area. ITC officials said the cause of the fire is still unknown. EPA on-site coordinator Adam Adams said they have been in Deer Park since Sunday, conducting air monitoring at ground level and in the plume. Biggest concerns are "volatile organic chemicals" and particulates, Adams said. He added that no hazardous levels have been detected.
Brett Coomer/Houston Chronicle via AP

Authorities say it appears that the suppressive foam firefighters are using at a Houston-area petrochemicals storage facility is separating at times and allowing dangerous benzene vapors to escape before another layer of foam can be applied.

The fire began Sunday and was extinguished Wednesday, but a flare-up occurred later Wednesday that crews are working to prevent from occurring again.

Authorities say winds are light Thursday so the vapors aren't spreading beyond the immediate area of the ITC plant.

National Guard troops have been called in and residents are being told to stay inside. They say orders to stay indoors are being done "out of an abundance of caution."