No Timetable for End to Fire at Chemical Facility

Fire crews have already used 137,00 gallons of foam to fight the blaze. 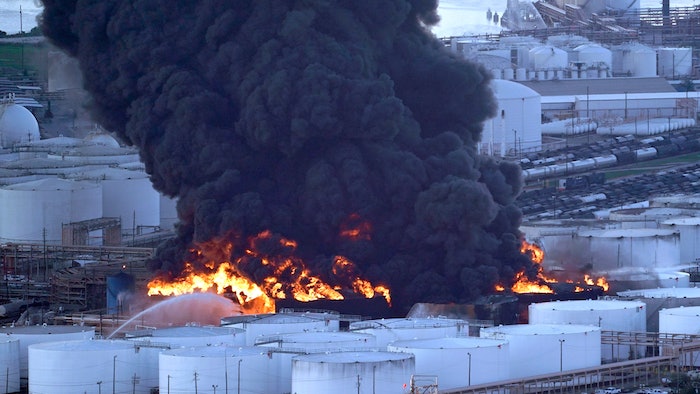 Firefighters battle a petrochemical fire at the Intercontinental Terminals Company Monday, March 18, 2019, in Deer Park, Texas. The large fire at a Houston-area petrochemicals terminal will likely burn for another two days, authorities said Monday, noting that air quality around the facility was testing within normal guidelines.
AP Photo/David J. Philli

HOUSTON (AP) — Officials said Tuesday that they're not sure when a fire at a Houston-area petrochemicals storage facility will burn itself out, but they are confident that the air quality is safe, despite the huge plume of smoke coming from the blaze (view photos in gallery).

Harris County Judge Lina Hidalgo said at a news conference that monitors show the levels of contaminants in the air are safe and that the plume coming from the site in Deer Park, southeast of Houston, is reaching at least 4,000 feet (1,219 meters) up and staying high enough so that the air quality at ground level is safe.

"It's understandable why people would be scared," said Hidalgo, the county's top administrator. "We're sharing information with the public so that everybody knows what we know, what we're doing and where we're headed."

The plume could carry particulates as high as 6,200 feet, officials said, but fog is forecast for the area Wednesday morning that could drag the plume downward, making the air quality more hazardous.

The fire that began Sunday at the Intercontinental Terminals Company and remained intense enough Tuesday to create its own micro weather system, causing shifting winds in the area, officials said.

The head of the county's health department, Dr. Umair Shah, said "there continues to be low risk to our community," but vulnerable groups such as the elderly and pregnant women should be cautious.

At a news conference Tuesday afternoon, the company said eight tanks were on fire while the seven other tanks located in the same section of the storage facility were not on fire.

Firefighters are using water and foam to try to prevent the blaze from spreading to the other tanks. A drop in water pressure allowed the fire to intensify overnight Tuesday and spread to two additional tanks, but the pressure later normalized, authorities said.

Officials previously said the fire could have burned itself out by Wednesday, but they scrapped that timetable on Tuesday.

ITC spokeswoman Alice Richardson said the company was "working our hardest to get this current incident under control."

"Of course ITC is very sorry. ... This isn't an event we wanted," a teary-eyed Richardson said during a news conference Tuesday morning.

Ray Russell with Channel Industries Mutual Aid, an organization that coordinates rescue and emergency capabilities of the local petrochemical industry, said fire crews battling the blaze have now taken an offensive stance against it and began attacking two tanks that are on fire. Fire crews had previously been in a defensive mode.

"By (Wednesday) morning we'll know a lot better of how bad this situation is going to last," Russell said at an afternoon ITC news conference.

Russell said fire crews have so far used 137,00 gallons of foam to fight the blaze.

Deer Park Mayor Jerry Mouton Jr. said that after visiting the scene of the fire Tuesday afternoon, he was reassured that everything that can be done to battle the blaze is being done.

The school districts in Deer Park and in nearby La Porte canceled classes on Monday but reopened Tuesday, albeit with restrictions on outdoor activities. Each city has about 34,000 residents.