The terminal stores petrochemical liquids and gases, including fuel oil and bunker oil. 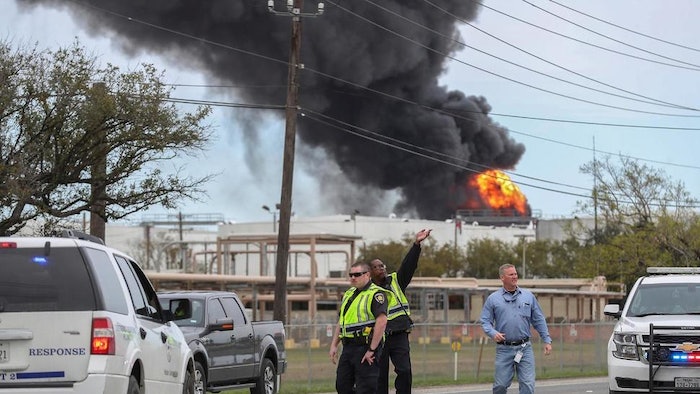 Smoke rises from a fire burning at the Intercontinental Terminals Company in Deer Park, east of Houston, Sunday, March 17, 2019. Some residents in the area are being urged to find a safe location indoors after the fire broke out at the petrochemicals terminal.
Steve Gonzales/Houston Chronicle via AP

HOUSTON (AP) — Some Houston-area residents have been urged to remain indoors as a fire burns at a petrochemicals terminal.

The fire started Sunday morning at Intercontinental Terminals Company in Deer Park, about 15 miles (24 kilometers) southeast of Houston, and continued to burn Sunday night. Deer Park officials issued a shelter-in-place directive after the fire was reported.

Efforts to extinguish the fire with foam continue.

Harris County officials say the fire started at the terminal that stores petrochemical liquids and gases, including fuel oil and bunker oil. The company's website says the terminal has a storage capacity of 13.1 million barrels.

The fire is the second in as many days at a Houston-area petrochemical facility. A fire at an ExxonMobil plant in nearby Baytown that broke out Saturday has been contained.