Marine Vessel May Have Caused Leaks into Great Lakes

The coolant leak was from submerged electric cables in the waterway connecting Lake Huron and Lake Michigan. 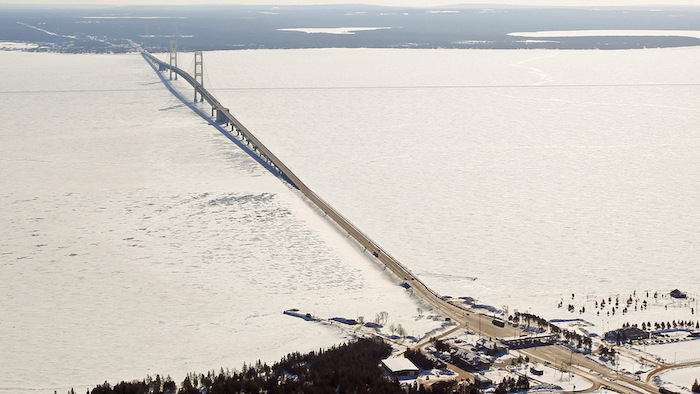 This aerial file photo shows a view of the Mackinac Bridge, which spans a 5-mile-wide freshwater channel called the Straits of Mackinac that separates Michigan's upper and lower peninsulas.
Keith King/Traverse City Record-Eagle via AP

MACKINAW CITY, Mich. (AP) — The U.S. Coast Guard says a coolant fluid leak this week from submerged electric cables into the waterway that connects Lake Huron and Lake Michigan may have been caused by a marine vessel. Ensign Pamela Manns said Friday that the Coast Guard is investigating the cause.

The Coast Guard says about 600 gallons (2,270 liters) of mineral-based synthetic oil escaped into the Straits of Mackinac, which is between Michigan's Upper and Lower peninsulas. The two cables are operated by Wisconsin-based American Transmission Company, which has taken them out of service.

Officials say there's little risk to the public or wildlife because the fluid will be diluted, while heavy shoreline ice should prevent anyone from coming in contact with the oil.