The company, which develops engineered paving and pavement preservation products, has not taken responsibility for the spill. 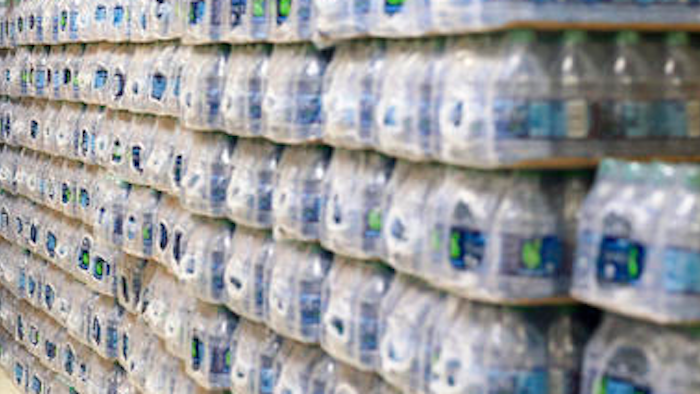 Corpus Christi, Texas is warning its 320,000 residents not to use tap water because it might be contaminated with petroleum-based chemicals, prompting a rush on bottled water and the closure of local schools.
Gabe Hernandez/Corpus Christi Caller-Times via AP

CORPUS CHRISTI, Texas (AP) — Officials eased restrictions on tap water use in outlying parts of Corpus Christi, nearly 24 hours after warning all 320,000 residents of the Gulf Coast city to stop using it because a harmful chemical had leaked from an industrial plant into the water supply.

The city released a map late Thursday showing the parts of the city where it was now safe to drink water from the faucet. The majority of city residents should continue to refrain from using tap water until further notice, officials said.

Ergon Asphalt and Emulsions Inc. said in a statement Thursday night that it has been in contact with the Texas Commission on Environmental Quality and is "working cooperatively to provide all information to ensure state officials can remedy the situation as quickly as possible."

The statement from the Mississippi-based company, which specializes in the development of engineered paving and pavement preservation products, does not take responsibility for the spill. However, City Councilwoman Carolyn Vaughn told the Corpus Christi Caller-Times that the city believes Ergon was responsible.

The company didn't respond to emails from The Associated Press seeking comment.

City officials sent out notifications late Wednesday advising residents to avoid using tap water for anything, including consumption and showers, until test results confirm it is safe. City officials had warned that "Boiling, freezing, filtering, adding chlorine or other disinfectants, or letting the water stand will not make the water safe."

Tensions built throughout Thursday as officials held several news conferences. At one, a group of residents began chanting, "What do we want? Clean water! When do we want it? Now!"

The leak forced school closures, disrupted commerce and caused a run on bottled water at supermarkets.

"I feel there's a lot more information that we're not being told," Reba Gandara told the Corpus Christi-Caller Times. "We deserve transparency and (knowing) what's going on with the water that is being provided to us. And it's not just the water — it's how it occurred."

Mayor Dan McQueen said he didn't think the release of the chemical extended beyond the industrial district. "We are pushing very hard to get our water turned on as soon as we can," McQueen said.

City spokeswoman Kim Womack told KRIS-TV that officials did not find a "backflow preventer" at the site. "They're saying there is one and we're telling them 'show us,'" she said.

"In the simplest terms, someone was careless when they were injecting chemicals with a pump and ... when the injection occurred, it crossed over into our water system," she told KRIS-TV.

Anywhere from three to 24 gallons of the chemical got into the water system. It is an asphalt emulsifier that can burn the skin in concentrated amounts.

"We haven't confirmed that this product is even in the flow system," McQueen said.

City councilman Michael Hunter told the Caller-Times early Thursday that it was unlikely that the leaked chemicals were concentrated enough to do harm, but that officials must take every precaution.

The TCEQ said it has initiated "multiple measures," including sampling "to determine the extent of potential impact." Meanwhile, Gov. Greg Abbott said his office is coordinating with the TCEQ, the Texas Division of Emergency Management and the Department of State Health Services on the issue. The Texas Division of Emergency Management is coordinating shipments of drinking water to the city.

It is just the latest in a string of water scares for this Gulf Coast city of 320,000 people.

In May, Corpus Christi officials issued their third boil-water advisory in a year. That notice lasted two weeks and officials at the time said it was largely a precautionary measure taken after nitrogen-rich runoff from rain flowed into the water system, resulting in low chlorine disinfectant levels in the water supply.

Boil-water notices were issued last year because of elevated levels of E. coli and another for low chlorine levels, the Caller-Times previously reported. The notices mirrored two others that were issued in 2007.

City crews have worked to reconfigure some water mains to ensure that water keeps circulating and to prevent bacteria growth. But an overarching concern is an old water system where more than half of 225 miles of cast-iron pipe needs to be upgraded. Many of the pipes were installed in the 1950s and when they decay they're prone to collapse or to slow water flow, allowing bacteria to fester.

Civic leaders have expressed concern that recurring water advisories and warnings could cause long-term harm to the area's vibrant tourism business.

Marine Vessel May Have Caused Leaks