Chinese Workers Say They Were Tricked Into Illegal U.S. Work

A recruiter guaranteed a job that tripled their factory wages. 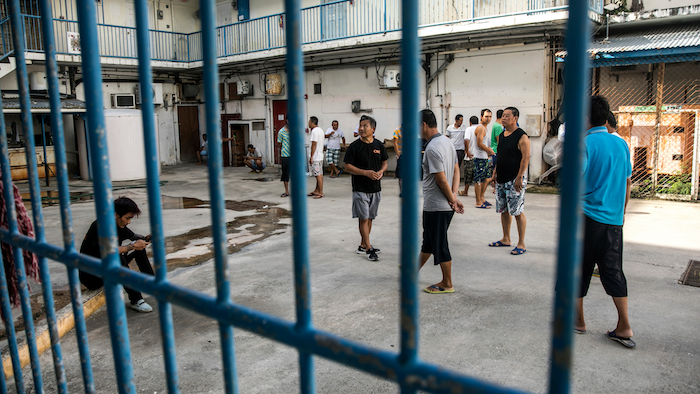 In this July 26, 2017 photo, Chinese laborers at the Imperial Pacific Casino gather in front of their living quarters before a protest in Saipan, the Northern Mariana Islands, a U.S. commonwealth in the Western Pacific. Foreign workers at Chinese construction firms building the casino are still waiting to be paid their wages. U.S. officials announced $14 million in settlements last week with the companies after finding workers were paid less than required by law. But hundreds of workers remain confused about what's owed and how they'll be paid.
AP Photo/Daniel Lin

HONOLULU (AP) — Zhou Qingjiang was toiling in a factory in China's rust belt when he decided to pack his bags for America. A recruiter guaranteed a job that paid $3,000 a month — more than triple the average wage in China — as long as Zhou forked over thousands of dollars for his help. The offer was too good to pass up.

Ten days later, Zhou found himself on the tiny Pacific island of Saipan, a U.S. Commonwealth, working 14-hour days with few breaks on a casino construction site. He bunked with eight men in dilapidated housing and took home less than half the promised wages. This was not the American dream he pictured.

"All those agents tricked us," said Zhou, 46. "When I arrived and saw hundreds of other Chinese workers, I realized we were all here illegally."

U.S. officials have been investigating and announced settlements last week with four Chinese construction firms to pay $14 million in back wages and damages to 2,400 affected workers. The companies, contracted by Hong Kong's Imperial Pacific International, brought workers on tourist visas, paid them less than required by law and failed to secure proper work authorization by exploiting a visa waiver program that allows Chinese citizens to travel to the Northern Mariana Islands.

The Associated Press interviewed six workers, all of whom recounted experiences similar to Zhou's. One recalled working 19-hour shifts, another said his passport was confiscated, and all said recruiters assured them they would enter the U.S. legally.

Job placement fees were as high as $17,000, and one worker remembers ponying up an additional $1,000 to enter the construction site.

What's playing out on Saipan, nearly 4,000 miles (6,440 kilometers) west of Hawaii, highlights challenges for both the United States and China.

For the U.S., the case comes as President Donald Trump cracks down on visa fraud and illegal immigration. Global projects, like the Saipan casino hotel, form the cornerstone of President Xi Jinping's plan to boost China's clout by splashing $1 trillion in construction and infrastructure around the world. But the initiative, dubbed "One Belt, One Road," is suffering setbacks — projects are delayed, governments are pulling out, and now, U.S. officials have linked illegal migrant labor.

After a Chinese worker in Saipan died on the job last year, the FBI raided the site and discovered illegal workers, along with hundreds of their passports locked in cabinets, and spreadsheets that listed employees as "heigong," the Chinese word for illegal laborer, according to court documents.

Construction halted, leaving workers stranded. Employees protested and demanded reparations — many suffered injuries while working. Eventually, many returned to China or took jobs in other countries, even if they hadn't recouped all funds due. A few have stayed in Saipan. Hundreds of workers remain confused about what they're owed, how they'll be paid and when they'll get the money.

"I've been waiting a year to be paid," said Xu Longcai, 51, a farmer from northeast China. "I borrowed so much money to come here. But I don't have a single cent — how can I go home? I can't pay what I owe."

The U.S. Labor Department and Saipan authorities didn't respond to requests for comment about how it would ensure money would be paid to workers. Imperial Pacific said in a statement last week it is pleased a settlement was reached.

Construction is the second most common industry for forced labor, according to the International Labour Organization in Geneva. The group estimates nearly 25 million people were victims of forced labor in 2016, with roughly 60 percent working in private sectors.

"This is a pretty classic trafficking and forced labor scenario," said Agnieszka Fryszman, partner and chair of the human rights practice at law firm Cohen Milstein in Washington, D.C. "You have people with these debts. . They're in the middle of the ocean. The isolation of the location is ripe for exploitation."

But even with help from the authorities, "can you ever enforce the judgment, and how would you do that?" Fryszman said. "You'd have to get their assets here."

The U.S., for instance, could require Imperial Pacific and its contractors to buy wage bonds, which ensures money is available if violations are found, said Aaron Halegua, a lawyer and research fellow at New York University, who is following the Saipan case.

"In New York state, any nail salon employing even just two individuals is required to purchase a wage bond," he said. "The need is even more compelling in the case of foreign companies, which often hold all their assets in the home country and simply establish a corporate shell entity in the United States."

Without that, it can be nearly impossible to collect money, which often forces the U.S. to settle workers' claims for much less than owed. Imperial Pacific could also be mandated to hire a reputable third party to train workers about their labor rights and workplace safety, he said, especially as some of these workers, like farmer Xu, have no prior construction experience.

A person who answered a phone number for the agent Zhou dealt with said he was no longer dealing with Saipan, and promptly hung up.

Zhou said he received some money but claims he's still due over a month's pay, and possibly damages. He's not sure how to calculate what's due.

Despite his Saipan ordeal — his first time out of his hometown province — he decided to go back abroad and just started working as a dishwasher in Singapore to support his family.

"I'm a little old to do this kind of work overseas," he said. "But I don't have a choice. I need to make a living."