The stocks, which enable guns to fire like automatic weapons, have become a focal point in the gun control debate. 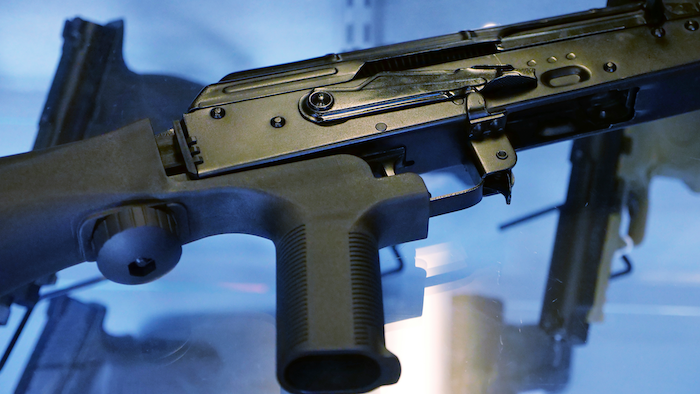 In this file photo, a device called a "bump stock" is attached to a semi-automatic rifle at the Gun Vault store and shooting range in South Jordan, Utah.
AP Photo/Rick Bowmer

WASHINGTON (AP) — The Trump administration said Saturday it has taken the first step in the regulatory process to ban bump stocks, likely setting the stage for long legal battles with gun manufacturers while the trigger devices remain on the market.

The move was expected after President Donald Trump ordered the Justice Department to work toward a ban following the shooting deaths of 17 people at a Florida high school in February. Bump stocks, which enable guns to fire like automatic weapons, were not used in that attack — they were used in last year's Las Vegas massacre — but have since become a focal point in the gun control debate.

The Justice Department's regulation would classify the hardware as a machine gun banned under federal law. That would reverse a 2010 decision by the federal Bureau of Alcohol, Tobacco, Firearms and Explosives that found bump stocks did not amount to machine guns and could not be regulated unless Congress amended existing firearms law or passed a new one.

A reversal of the department's earlier evaluation could be seen as an admission that it was legally flawed, which manufacturers could seize on in court. Even as the Trump administration moves toward banning the devices, some ATF officials believe it lacks the authority to do so.

But any congressional effort to create new gun control laws would need support from the pro-gun Republican majority. A bid to ban the accessory fizzled last year, even as lawmakers expressed openness to the idea after nearly 60 people were gunned down in Las Vegas.

Some states have sought their own restrictions in light of the inaction. A ban on bump stocks was part of a far-reaching school safety bill signed by Florida Gov. Rick Scott, a Republican, on Friday that was immediately met with a lawsuit by the National Rifle Association. The powerful group has said it supports ATF regulations on the accessory but opposes any legislation that would do that same. The NRA did not immediately return calls for comment Saturday.

Calls mounted for a bump stock ban after the Las Vegas shooting, and the Justice Department said in December it would again review whether they can be prohibited under federal law. Trump told officials to expedite the review, which yielded more than 100,000 comments from the public and the firearms industry. Many of the comments came from gun owners angry over any attempt to regulate the accessory, a move they view as a slippery slope toward outlawing guns altogether.

The proposal still needs the approval of the Office of Management and Budget.