The widow of Parker Waldridge, also of Oklahoma, filed a similar lawsuit a week earlier. Patterson-UTI hasn't responded to a request for comment, but previously said it's committed to preventing future accidents. An attorney for Red Mountain hasn't returned a phone request for comment.

The explosion near Quinton, about 100 miles (160 kilometers) southeast of Tulsa, also killed Matt Smith of Oklahoma, Josh Ray of Texas, and Cody Risk of Colorado. 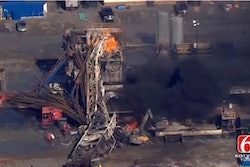