The rush to launch service on a new, faster Amtrak route came at a deadly cost 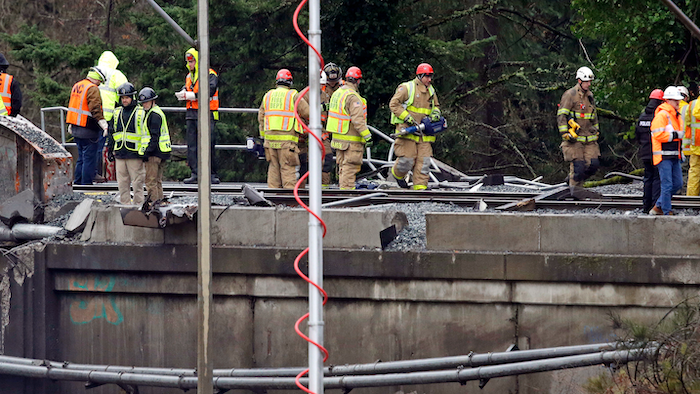 Workers stand atop a damaged railroad bridge at the scene of an Amtrak train crash onto Interstate 5 a day earlier Tuesday, Dec. 19, 2017, in DuPont, Wash. Federal investigators say they don't yet know why the Amtrak train was traveling 50 mph over the speed limit when it derailed Monday south of Seattle.
AP Photo/Elaine Thompson

The rush to launch service on a new, faster Amtrak route near Seattle came at a deadly cost: none of the critical speed-control technology that could have prevented a derailment was active before the train set off on its maiden voyage.

Work to install the sophisticated, GPS-based technology known as positive train control isn't expected to be completed until next spring on the newly opened 15-mile (24-kilometer) span where the train derailed, according to Sound Transit, the public agency that owns the tracks.

The rest of the project was "under a very aggressive schedule," according to documents posted on Sound Transit's website. The terms and conditions for funding the $180.7 million project, through the American Recovery and Reinvestment Act, required track, signal and other infrastructure work be completed by June 30, the documents said. Even a one-month delay would "significantly impact the project."

The train in Monday's crash was going 80 mph (129 kph) in a 30 mph (48 kph) zone when it raced off the rails as they curved toward a bridge, hurtling train cars onto a highway below, investigators said. Three people were killed, and dozens were injured. Federal investigators say they are looking into whether the engineer was distracted.

A positive train control system could have detected the speeding and automatically applied the brakes to stop the train, said Najmedin Meshkati, a University of Southern California professor who has studied the technology for three decades.

"It is another layer of safety," he said.

Amtrak and the Washington Department of Transportation started publicizing the switch to the new route in October. Amtrak CEO Richard Anderson said that "no one wants PTC more than me" but would not directly answer questions about why it is taking so long to get the speed-control technology up and running across the board.

"I'm a huge believer in positive train control," he said at a news conference Tuesday evening. "It just makes so much scientific sense."

Anderson said the company's safety culture can continue to improve and said the crash should be seen as a "wake-up call."

"It's not acceptable that we're involved in these types of accidents," he said.

Railroads are under government orders to install positive train control by the end of 2018 after the industry lobbied Congress to extend earlier deadlines, citing complexity and cost.

Union Pacific, the nation's largest freight carrier, said it was spending about $2.9 billion on the technology. Industry groups estimate railroads will spend a total of about $10 billion to install and implement the systems.

Monday's wreck is just the latest example of a deadly crash that experts say could have been prevented if the technology were in place to slow down the train when engineers go too fast, get distracted or fall ill.

U.S. investigators have listed a lack of such a system as a contributing factor in at least 25 crashes over the last 20 years, including two in the last four years where a train approached sharp curves at more than double the speed limit.

Positive train control was installed on 23 percent of the nation's passenger route miles and 37 percent of freight route miles as of July, the last time the Federal Railroad Administration updated its online tracker for the technology.

It is activated on the tracks Amtrak owns along the Northeast Corridor, from Boston to Washington, D.C., and on Amtrak's Michigan line. Many of its locomotives are equipped for positive train control.

Throughout the rest of the country, Amtrak operates on track owned by freight carriers and other entities that have made varying progress on installing the technology.

It's a work in progress on the route where the train derailed Monday. Sensors have been installed, but the system needs to be synchronized, tested and certified before it goes online, Sound Transit spokeswoman Rachelle Cunningham said.

The new route was designed to speed up service by removing passenger trains from a route along Puget Sound that's bogged down by curves, single-track tunnels and freight traffic.

The National Transportation Safety Board first recommended the use of "automatic train control" in 1970, a year after two Penn Central commuter trains collided, killing four and injuring 43.

The railroad industry was opposed for decades until a Metrolink commuter train collided head-on with a freight train near Los Angeles in 2008. Investigators said the train's engineer was texting and ran a stop signal, killing 25 people.

"It's a good fail-safe for human error," said Fran Kelly, assistant general manager for SEPTA, the Philadelphia-area commuter railroad that was an early adopter of positive train control. "It's using the best technologies available to complement what the human engineer is doing - the human element of it."

It was developed in one state after a study found that filling out the necessary forms is a major barrier to workers.
Oct 5th, 2020
Follow Us
Most Recent