The critical speed-control technology has been pushed off for close to five decades. 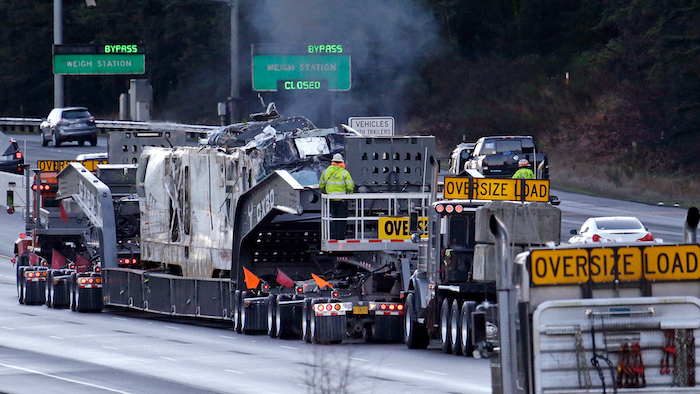 The engine from an Amtrak train that crashed onto Interstate 5 on Monday, is transported away from the scene, Wednesday, Dec. 20, 2017, in DuPont, Wash. Federal investigators in the deadly train wreck want to know whether the engineer was distracted by a second person in his cab as his train hurtled into a curve at more than twice the speed limit. The train took a 30 mph curve at 80 mph and plunged off an overpass, sending rail cars plummeting onto a busy highway south of Seattle.
AP Photo/Elaine Thompson

Nearly 300 people have died in train crashes that could have been prevented if railroads across the U.S. implemented critical speed-control technology that federal safety investigators have been pushing for close to five decades, according to rail crash data obtained by The Associated Press.

But despite overwhelming evidence it could save lives, Congress extended the deadlines for railroads to implement so-called positive train control for years.

All the while, new high-speed train routes continue to spring into operation without the technology, including the new route involved in Monday's Amtrak crash south of Seattle that killed three people and one in Florida that's expected to start service in the coming weeks.

Data that the National Transportation Safety Board provided to AP on Wednesday shows the crashes that the agency says could have been prevented by positive train control have led to 298 deaths, 6,763 injuries and nearly $385 million in property damage.

The records list crashes from 1969 through May 2015 — when an Amtrak train derailed in Philadelphia, killing eight people — and do not include Monday's wreck outside of Seattle, which experts say likely could have been prevented by the technology.

The GPS-based technology is designed to automatically slow or stop trains that are going too fast and can take over control of a train when an engineer is distracted or incapacitated.

"We have recommended PTC for decades," Bella Dinh-Zarr, a member of the NTSB, said Tuesday. "Unfortunately the deadline was moved farther into the future, and every year that we wait to implement PTC to its fullest extent means that more people will be killed and injured."

A 2008 Metrolink crash in California that killed 25 people pushed PTC to become a hot-button issue on Capitol Hill. Lawmakers mandated railroad companies install the GPS-based PTC technology by 2015, but rail agencies said they didn't have enough time to install the expensive, complicated system.

Despite rebukes from the federal agency that regulates train travel, congress extended the deadline until the end of 2018 and now, in some circumstances, railroads can apply for an extension until 2020.

Positive train control was installed on 24 percent of the nation's passenger route miles and 45 percent of freight route miles as of September 30, the date of the Federal Railroad Administration's most recent quarterly update to its online tracker for the technology.

When Amtrak officially launched its new, faster route near Seattle without the technology Monday, it came at a deadly cost.

Experts say it is likely the technology would have prevented the derailment that killed three people. The train — speeding 50 mph (80 kph) over the limit — went off the rails, sending several cars flying off a bridge onto the highway below.

Work to install positive train control isn't expected to be completed until next spring on the newly opened 15-mile (24-kilometer) span where the train derailed, according to Sound Transit, the public agency that owns the tracks.

"Should they have just waited to inaugurate service? In hindsight, maybe yes," said David B. Clarke, who runs the Center for Transportation Research at the University of Tennessee, Knoxville. "Clearly, if PTC was active, this would not have happened."

Washington Gov. Jay Inslee said Amtrak had committed to trying to ensuring the technology will be in place statewide before the Dec. 31, 2018 deadline. Amtrak also offered to pay all costs associated with deadly train derailment, as well as medical and other expenses of the victims, Inslee, a Democrat, said. Late Wednesday Washington transportation officials said passenger service along the rail line where the Amtrak train derailed won't resume service until the advanced safety systems are in place.

Positive train control is activated on the tracks Amtrak owns along the Northeast Corridor, from Boston to Washington, D.C., and on Amtrak's Michigan line. Many of its locomotives are equipped for positive train control. Throughout the rest of the country, Amtrak operates on track owned by freight carriers and other entities that have made varying progress on installing the technology.

In Florida, a higher-speed passenger rail service known as Brightline is expected to launch in the next few weeks. But positive train control will not be operational when the trains roll out on those lines, drawing the ire of some local officials and community groups.

Ali Soule, a spokeswoman for Brightline, said in a statement that the trains have automatic train control, which can sound an alert in the train's cab to alert the engineer if the train is going too fast and full positive train control is expected to be implemented by the federal deadline at the end of 2018.