The Sierra Club called for Anadarko to shutter all of its operations while state and federal authorities conduct a comprehensive review. The company did not respond. 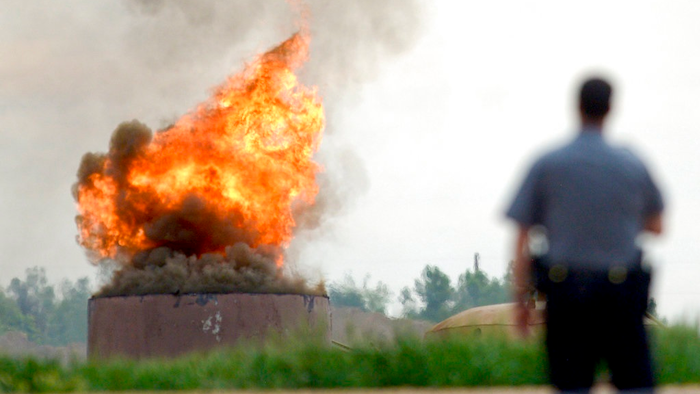 An oil tank burns after an explosion at a tank battery owned by Anadarko near the Grand View Estates neighborhood in Weld County on Thursday, May 25, 2017 in Mead, Colo. The fatal oil tank battery fire in northern Colorado appears to be unrelated to a nearby home explosion last month caused by a leaky gas line.
Lewis Geyer/Daily Camera via AP

DENVER (AP) — An oil tank explosion in northern Colorado killed a worker and burned three others, shooting up flames just miles away from an unrelated gas blast last month and prompting fresh questions about safety in one of Colorado's largest industries — oil and gas extraction.

The fire flared Thursday when the workers completed upgrades to an oil tank battery, which is a collection of tanks that receive crude oil production from a well.

Anadarko Petroleum Co. said the facility in Mead, about 40 miles (64 kilometers) north of Denver, was not in service and the fire was under investigation.

The company also owns a well connected to a home explosion that killed two people in Firestone, a city a few miles from Mead. The April 17 blast was traced to a leaky well.

Anadarko says it will permanently shut down the Firestone well and two others in the neighborhood. The pipeline was thought to be out of service, but investigators say it was still connected to a well near the home.

Democratic Gov. John Hickenlooper, a former petroleum geologist, said Friday that the two explosions apparently were not related. State agencies and the U.S. Occupational Safety and Health Administration were investigating the latest blast, he said.

"We will continue to work closely with investigating agencies and the industry to better understand the cause of this accident and take any necessary action to ensure that this doesn't happen again," Hickenlooper said.

Democratic state Rep. Mike Foote said the industry and government "have an obligation to treat these incidents not as isolated or freak accidents."

The Sierra Club called for Anadarko to shutter all of its operations while state and federal authorities conduct a comprehensive review. The company did not respond.

A third safety accident related to the energy industry happened Thursday in northeast Colorado, near the Nebraska border. A leak of natural gas was discovered from an underground storage facility.

The leak occurred in a well that injects and withdraws gas from the facility owned by East Cheyenne Gas Storage. Logan County called all residents who live within 2 miles of the well and urged them to evacuate.

There were no injuries from the storage-tank leak.