The tanker was carrying nearly 1 million barrels of a type of gassy, ultra-light oil, when it collided with a freighter transporting grain from the U.S. to China. 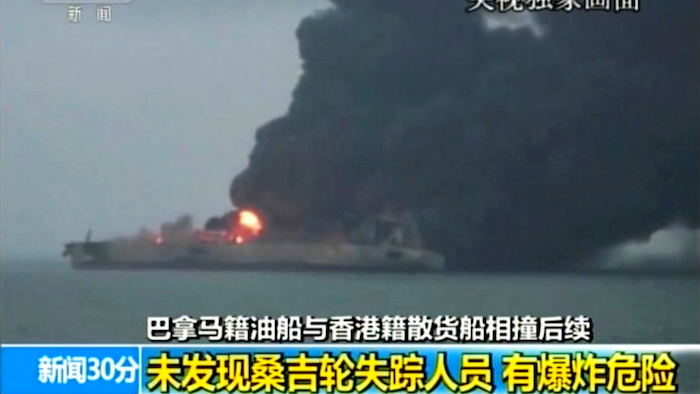 n this image from video run by China's CCTV shows the Panama-registered tanker "Sanchi" is seen ablaze after a collision with a Hong Kong-registered freighter off China's eastern coast, Monday, Jan. 8, 2017. The U.S. Navy has joined the search for 32 crew members missing from the oil tanker that caught fire after colliding with a bulk freighter off China's east coast.
CCTV via AP Video

BEIJING (AP) — Rescuers have found a body believed to be of a sailor from the Iranian oil tanker set ablaze after a collision in the East China Sea, China's Ministry of Transportation said Tuesday, as the search continued for another 31 missing from the same ship.

The ministry said the body recovered Monday had yet to be identified but was wearing a protective suit designed to withstand cold seawater. There was no further word about the others missing since the Panamanian-registered Sanchi collided with a freighter late Saturday.

Chinese media said the tanker was still on fire Tuesday and at risk of exploding.

The tanker was carrying 136,000 metric tons (nearly 1 million barrels) of condensate, a type of gassy, ultra-light oil, when it collided with the Hong Kong-registered freighter CF Crystal. All 21 crew members of the Crystal, which was carrying grain from the United States to China, were rescued, the Chinese ministry said. The Crystal's crew members were all Chinese nationals.

It wasn't immediately clear what caused the collision, which happened in open seas rather than a narrow channel where such accidents are more common. Ships of such size generally come with sophisticated radar and other technologies aimed at preventing collisions.

The Sanchi was sailing from Iran to South Korea when the collision occurred 257 kilometers (160 miles) off the coast of Shanghai, China's Ministry of Transport said.

Ships and aircraft from South Korea and the U.S. are aiding in rescue efforts, which have been hampered by fierce fires and poisonous gases that have engulfed the tanker and surrounding waters.

The collision has set off concerns of a potential environmental disaster, although condensate is more likely to evaporate or burn off immediately than thick, heavy crude oil. However, the Sanchi's own fuel that leaked during the collision will be more difficult to clean, especially if the tanker explodes and sinks.

The tanker has operated under five different names since it was built in 2008, according the U.N.-run International Maritime Organization. The IMO listed its registered owner as Hong Kong-based Bright Shipping Ltd., on behalf of the National Iranian Tanker Co., a publicly traded company based in Tehran. The National Iranian Tanker Co. describes itself as operating the largest tanker fleet in the Middle East.

An official in Iran's Oil Ministry, who spoke to The Associated Press on condition of anonymity because he was not authorized to speak to reporters, said the tanker was owned by the National Iranian Tanker Co. and confirmed that 30 of the tanker's 32 crew members were Iranians. The others are Bangladeshi.

It's the second collision for a ship from the National Iranian Tanker Co. in less than a year and a half. In August 2016, one of its tankers collided with a Swiss container ship in crowded waters near Singapore, damaging both ships but causing no injuries or oil spill.