The deadly explosion sparked a geyser of fire Monday and closed off the vital pipeline. 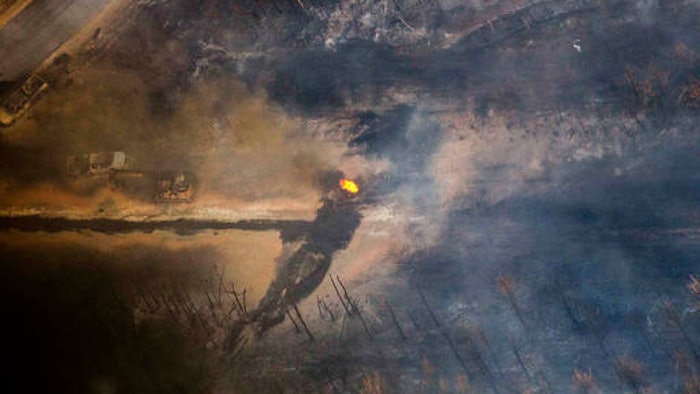 A flame continues to burn after a Monday explosion of a Colonial Pipeline, Tuesday, Nov. 1, 2016, in Helena, Ala. The blast, which sent flames and thick black smoke soaring over the forest, happened about a mile west of where the pipeline ruptured in September, Gov. Robert Bentley said in a statement.
AP Photo/Brynn Anderson

HELENA, Ala. (AP) — Executives at a pipeline company say their goal is to restart the line as early as this weekend after an explosion and fire shut down gasoline shipments to millions across the South.

The deadly explosion sparked a geyser of fire Monday and closed off the vital pipeline, raising fears of another round of gas shortages and price increases. It's Colonial Pipeline's second accident and shutdown in two months (view photos in gallery).

Continuing fires in the drought-stricken area of central Alabama hampered officials' efforts to fully assess the damage Tuesday afternoon, and firefighters built an earthen berm to contain the burning fuel.

The accident happened when a dirt-moving machine struck the pipeline, ignited gasoline and sparked a blast Monday, killing one worker and injuring five others, the Georgia-based company said.

Four of the injured remained hospitalized, Colonial spokesman Bill Berry said Tuesday afternoon in nearby Helena, Alabama. UAB Hospital, where the injured were treated, declined to release information on them, citing requests by their families for privacy.

Another worker was treated for less severe injuries and released from a hospital, Berry said.

As much as 168,000 gallons of gasoline could have burned, spilled, evaporated or remained in the pipeline, the company said.

The explosion happened a few miles from where the pipeline sprung a leak and spilled 252,000 to 336,000 gallons of gasoline in September. After the leak, the company used one of Colonial's two main lines to move gasoline as it made repairs, but it still led to days of dry pumps and higher gas prices in Alabama, Georgia, Tennessee and the Carolinas while repairs were made.

Contractors were working on repairs related to the September leak when gasoline ignited and spread fire to the pipeline, the U.S. Pipeline and Hazardous Materials Safety Administration said Tuesday.

The nine-member crew was using a track hoe to excavate the pipeline so permanent repairs from the September leak could be made, Colonial Pipeline executive Gerald Beck said.

The pipeline provides nearly 40 percent of the region's gasoline and usually runs at or near full capacity. Together, Colonial's two lines carry more than 2 million barrels of fuel a day.

By mid-day Tuesday, Colonial Pipeline said it was able to restart the second of its two main lines, which carries diesel and jet fuel.

The severity of the gasoline shortage will depend on how long the gasoline pipeline remains closed, AAA spokesman Mark Jenkins said.

"We would encourage drivers not to panic, so don't run to the gas station and start filling up every gas can you can," said AAA spokeswoman Tamra Johnson.

After the September leak, Colonial said it made up some of the gasoline shortfall by sending gas through the line that usually carries diesel and jet fuel. The company has not said whether it will do so again.

From 3,000 feet in the air, a flame could be seen still burning in a haze of smoke Tuesday when an AP photographer flew over the site.

Photographer Brynn Anderson said the blackened earth and a large area of charred trees are surrounded by other trees awash in fall colors just beyond the burned area.

In 2003, the EPA fined Colonial $34 million for gross negligence after it spilled almost a million gallons of diesel in South Carolina, polluting waterways in four states. The company also agreed to spend $30 million to upgrade environmental protections on its pipeline system.

Since 2006, the company has reported 178 spills and other incidents that released a combined 193,000 gallons of hazardous liquids and caused $39 million in property damage. Most were caused by problems with materials, welding or some other equipment failure, according to federal accident records reviewed by The Associated Press.

The company paid $381,000 in penalties for violating safety rules during the same period.