The money will be distributed to any resident or business in the affected area through an application process to be determined later. 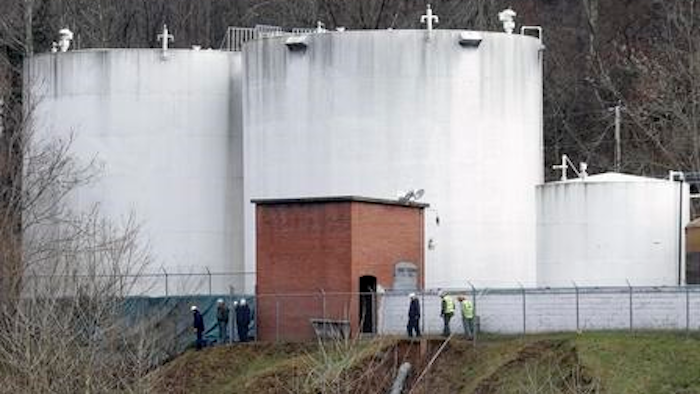 In this Monday, Jan. 13, 2014, file photo, workers inspect an area outside a retaining wall around storage tanks where a chemical leaked into the Elk River at Freedom Industries storage facility in Charleston, W.Va. A federal judge is expected to hear details, Monday, Oct. 31, 2016, of a potential tentative settlement between a water company and plaintiffs who sued over the company's handling of a 2014 chemical leak in southern West Virginia.
AP Photo/Steve Helber, File

U.S. District Judge John Copenhaver approved the proposed deal after more than two hours of closed-door negotiations on the wording of the class-action agreement.

Stuart Calwell, an attorney representing residents and businesses, said that under the settlement, West Virginia American Water Co. will pay $126 million and chemical maker Eastman Chemical will pay $25 million. The money will be distributed to any resident or business in the affected area through an application process to be determined later.

Calwell said he was very pleased by the settlement and that the money involved "is a recognition of what folks had to endure."

He said Copenhaver indicated that "I want that money to go to those who were deprived of water."

The water company also agreed not to seek a rate increase from state regulators to recoup the costs of settling the lawsuit. Copenhaver was adamant earlier Monday that those costs must be paid by the company's investors and stockholders, not customers who were spill victims.

"If so, this becomes a fool's errand," Copenhaver had said.

The companies said in separate statements Monday evening that the settlement isn't an admission of liability. West Virginia American Water went further, saying the lawsuits brought against it "were without merit."

But the water company, which was accused in the lawsuit of not adequately handling preparations and response to the spill, said the settlement "allows us and our dedicated employees to serve our customers without the distractions of ongoing lawsuits. Our commitment to the highest standards of customer service will always be a top priority."

Eastman Chemical said in a statement the settlement will "provide benefits and closure to the community."

Copenhaver has scheduled a Nov. 14 conference in his chambers to receive the final agreement. A trial that was to start last week has been continued until Dec. 5.

In January 2014, a tank at Freedom Industries in Charleston leaked thousands of gallons of coal-cleaning chemicals into the drinking water supply for 300,000 people in and around Charleston, prompting a tap-water ban for days. Businesses were temporarily shut down and hundreds of people headed to emergency rooms for issues from nausea to rashes.

More than 224,000 area residents, more than 7,300 business owners and an undetermined number of hourly "wage earners" were part of the class of plaintiffs in the suit. Copenhaver certified the lawsuit more than a year ago.

Joy Gunnoe, who owns a sausage and salad company bearing her name, said she lost $387,000 in revenue when she couldn't produce any products because of the tap-water ban. She said outside the court that she had feared the lawsuit could have gone on for years. A trial was set to start last week but was repeatedly delayed to allow for settlement negotiations.

Both Gunnoe and Charleston City Council member Karan Ireland said they felt relieved by the settlement.

"It's a great day," Ireland said. "I really encourage all of my fellow residents to fill out their forms and get what's coming to them."

The spill prompted Freedom's bankruptcy and resulted in 30-day prison sentences for two company officials on federal pollution charges, as well as fines and probation for four others. A state law enacted after the disaster requires more inspections and registrations of aboveground storage tanks.

In September the U.S. Chemical Safety Board said the spill could have been avoided if Freedom had inspected its storage tanks and spotted two tiny holes forming at the bottom of one of the tanks.

The facility, now closed and torn down, was 1.5 miles upstream from West Virginia America's regional drinking water intake on the Elk River.