Angry Volkswagen owners told judge that a $10 billion settlement does not adequately compensate them for the automaker's emissions cheating scandal. 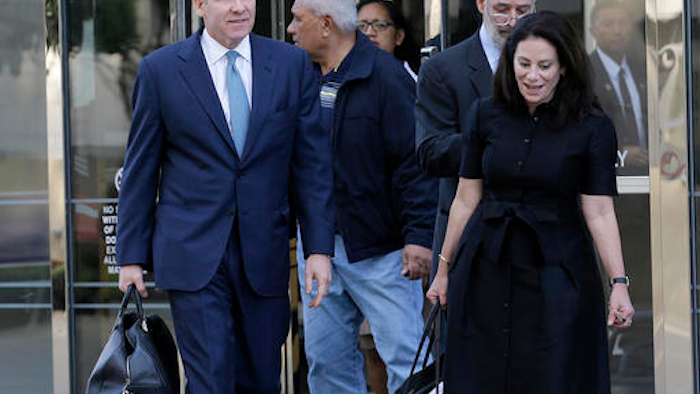 SAN FRANCISCO (AP) — Several angry Volkswagen owners told a federal judge on Tuesday that a $10 billion settlement does not adequately compensate them for the automaker's emissions cheating scandal, part of a vocal minority who objected to the deal as hundreds of thousands of others signed up for payments.

U.S. District Judge Charles Breyer will determine whether the settlement is fair to consumers and should receive final approval. He said he was "strongly inclined" to approve it but would make a final decision by Oct. 25, giving him time to consider the owners' objections and whether he should recommend any changes.

"We got played the fool," Mark Dietrich, an Audi owner from San Francisco, told the judge earlier at a hearing in San Francisco. "This settlement does not go far enough."

Dietrich demanded the full purchase price of his car as well as part of his registration fee.

The settlement calls for the German automaker to spend up to $10 billion to buy back or repair about 475,000 Volkswagens and Audi vehicles with 2-liter diesel engines and pay their owners an additional $5,100 to $10,000 each. Any repair options have yet to be finalized.

It also includes $4.7 billion for unspecified environmental mitigation to make up for the excess pollution and to promote zero-emissions vehicles. The combined $14.7 billion deal would be the largest auto-scandal settlement in U.S. history.

Attorneys who helped negotiate it said it was fair and had received support from the vast majority of eligible car owners. Volkswagen's lawyer said Tuesday that it was a good deal for buyers and would help the company regain people's trust.

But Blair Stewart, a Volkswagen owner from Palo Alto, said the company engaged in a "program of deception" that should not go unpunished. More than a dozen people spoke against the settlement at the hearing, among them people who sold their vehicles and objected that the new owner would get a windfall in the deal.

The scandal erupted in September 2015 when the U.S. Environmental Protection Agency said Volkswagen had fitted many of its cars with software to fool emissions tests, putting dirty vehicles on the road. Car owners and the U.S. Department of Justice sued.

The software recognized when the cars were being tested on a treadmill and turned on pollution controls. The controls were turned off when the cars returned to the road. The EPA alleged the scheme let the cars spew more than 40 times the allowable limit of nitrogen oxide, which can cause respiratory problems in people.

"This settlement is something that I think is very good for consumers," he said. "It's good for the environment, and it's a way for Volkswagen to regain the trust of its customers, the American people, regulators and do right by the environment."

As of last week, more than 330,000 people had signed up for settlement benefits, with about 3,200 opting out, said Elizabeth Cabraser, lead attorney for the plaintiffs. She said the deal's buyback option would give consumers the "retail replacement value" of their vehicles.