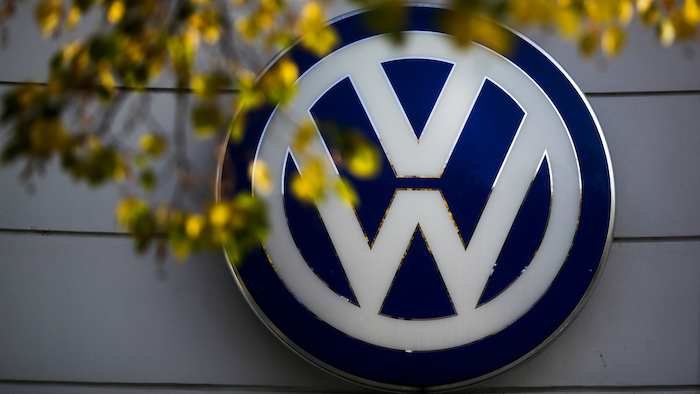 In this file photo, the VW sign of Germany's Volkswagen car company is displayed at a retailer in Berlin. U.S. District Judge Charles Breyer has scheduled a hearing to determine whether the deal is fair to consumers and should receive final approval.
AP Photo/Markus Schreiber, File

SAN FRANCISCO (AP) — A federal judge on Tuesday was set to hear from Volkswagen owners opposed to a $10 billion settlement over the automaker's emissions cheating scandal before he determines if the deal is fair to consumers.

More than two dozen people — many of them car owners unhappy with the proposed settlement — signed up to address U.S. District Judge Charles Breyer in San Francisco. He will decide whether to give the deal final approval, though he may not issue a ruling at the hearing. The judge gave it preliminary approval in July.

The settlement calls for Volkswagen to spend up to $10 billion to buy back or repair about 475,000 Volkswagens and Audi vehicles with 2-liter diesel engines and pay their owners an additional $5,100 to $10,000 each. Any repair options have yet to be finalized.

Vehicles with that type of engine make up the vast majority of the roughly 560,000 cars caught up in the scandal.

Attorneys who negotiated the deal have said it includes substantial payments to car owners and has resounding support. More than 311,000 people have registered for the settlement and less than 3,300 people have opted out, the attorneys said in a court filing last month urging Breyer to give the deal final approval.

Some owners have said they should receive the full purchase price of their vehicles. Others have opposed deductions for extra mileage.

The settlement also includes $2.7 billion for unspecified environmental mitigation and an additional $2 billion to promote zero-emissions vehicles. The combined $14.7 billion deal would be the largest auto scandal settlement in U.S. history.

The scandal erupted in September 2015 when the U.S. Environmental Protection Agency said the German automaker had fitted many of its cars with software to fool emissions tests, putting dirty vehicles on the road. Car owners and the U.S. Department of Justice sued.

The software recognized when the cars were being tested on a treadmill and turned on pollution controls. The controls were turned off when the cars returned to the road. The EPA alleged the scheme let the cars spew more than 40 times the allowable limit of nitrogen oxide, which can cause respiratory problems in people.