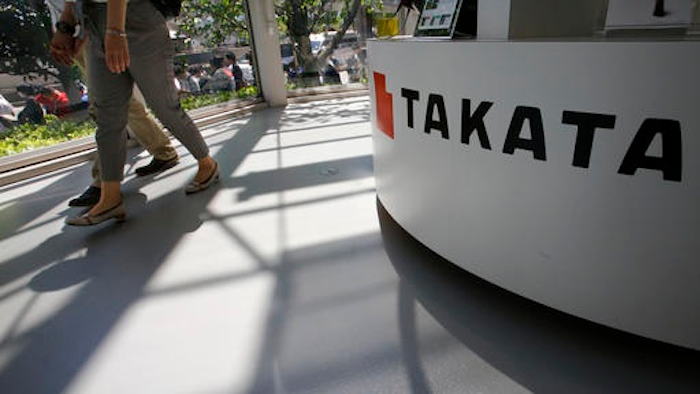 They're part of a massive expansion of Takata air bag recalls announced earlier this month. Seventeen automakers are adding 35 million-to-40 million inflators to what already was the largest auto recall in U.S. history.

In addition, the Japanese transport ministry on Friday announced 7 million additional recalls related to the Takata inflators. Those recalls cover all front air bags that do not have a chemical drying agent.

Friday's U.S. recalls include passenger air bags in older models in areas along the Gulf Coast with high heat and humidity. But other areas of the country are also affected depending on the age of vehicles.

Takata uses the chemical ammonium nitrate to create a small explosion that inflates the air bags in a crash. But the chemical can deteriorate over time when exposed to high heat and humidity and burn faster than designed. That can blow apart a metal canister designed to contain the explosion, spewing hot shrapnel into vehicles.

The inflators are responsible for 11 deaths and more than 100 injuries worldwide. Two additional deaths are under investigation in Malaysia and may have been caused by the inflators.

The recalls are among the first to be unveiled by automakers since Takata agreed to the recall expansion, and more recalls will be announced in the coming week. The recalls are being phased in by the government due to a lack of available replacement parts. Models that are from 2011 or older in high heat and humidity areas will get first priority, followed by 2008 and older models in Southern-tier states, then 2004 and older models in the rest of the country.

Research has shown that it takes at least six years for the ammonium nitrate to deteriorate. That's the reason older models are getting priority.

Honda had the biggest recall total on Friday with more than 4.5 million inflators, while Fiat Chrysler reported 4.3 million. The Honda total even includes about 2,700 Gold Wing motorcycles with optional front air bags.

Honda says the latest recall covers only about 2.2 million additional Honda and Acura vehicles. The other 2.3 million vehicles were recalled previously for other Takata air bag problems. Honda expects the recalls to start in late summer for automobiles and in late fall for the motorcycles.

Fiat Chrysler said it's not aware of any crashes or injuries involving its vehicles that are part of the recall.

The latest recalls cover mainly front passenger air bag inflators without the chemical drying agent. The jury is still out on whether Takata will have to recall millions more inflators with the drying agent. Takata has to prove to the government that those are safe by the end of 2019, or they will be recalled.

Since the recalled models vary by state and age, officials say that the best way to see if your car is affected is to go to https://vinrcl.safercar.gov/vin/ or manufacturer websites and key in the vehicle identification number. That number can be found on the driver's side of the dashboard near the windshield or on your state vehicle registration. It may take several weeks for all of the newly recalled vehicles to be entered into the databases.

Here are the models covered by the recalls announced on Friday: