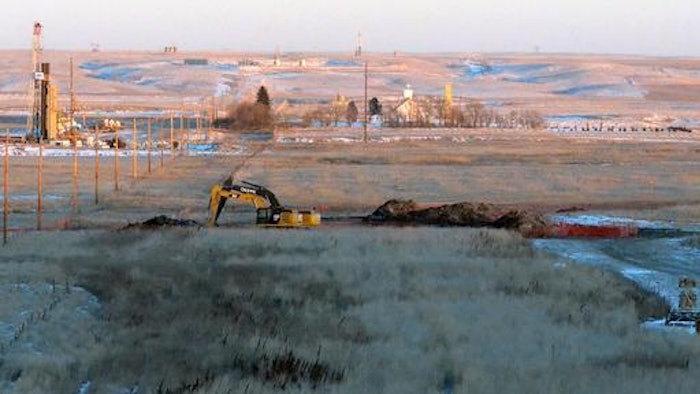 In this Jan. 12, 2015 file photo, crews dig at a spill site where a leak from a four-inch pipeline spilled nearly 3 million gallons of saltwater brine near Blacktail Creek outside Williston, N.D.
Zack Nelson/Williston Herald via AP, File

Long-term monitoring of waters downstream from spill sites is needed to determine what risks the pollution might pose for human health and the environment, geochemistry professor Avner Vengosh said. But the study revealed "clear evidence of direct water contamination" from oil development using the method known as hydraulic fracturing, or fracking, he said, describing the problem as "widespread and persistent."

Wastewater spills are a longstanding yet largely overlooked side effect of oil and gas production that worsened during the nation's recent drilling boom, when advances in fracking technology enabled North Dakota's daily output to soar from 4.2 million gallons in 2007 to 42 million gallons in 2014.

The Associated Press reported last year that data from leading oil- and gas-producing states showed more than 175 million gallons of wastewater spilled from 2009 to 2014 in incidents involving ruptured pipes, overflowing storage tanks and other mishaps or even deliberate dumping. There were some 21,651 individual spills. The numbers were incomplete because many releases go unreported.

The wastewater is often much saltier than the oceans and kills nearly all vegetation it touches, rendering sections of crop and ranch lands unusable. It also contains toxic chemicals, some of which are injected during fracking to release oil and gas from rock deposits and others that exist naturally underground.

In their report, published in the journal Environmental Science & Technology, Vengosh and other Duke researchers said their findings were based on an analysis of water samples from four areas affected by spills, two of which — in July 2014 and January 2015 — were the largest on record in North Dakota.

They identified unique chemical "fingerprints" that showed the contaminants came from brine spills and not some other source, Vengosh said.

In most samples, toxic selenium was measured in concentrations up to 35 times the level that the U.S. Environmental Protection Agency considers safe for freshwater aquatic life, the report said. And other elements were found in concentrations above the EPA limit for drinking water.

"The results of this study indicate that the water contamination from brine spills is remarkably persistent in the environment, resulting in elevated levels of salts and trace elements that can be preserved in spill sites for at least months to years," the report said.

Dave Glatt, chief of North Dakota's environmental health section, said it was well known that oilfield wastewater is laced with toxic substances. But most spills don't endanger the public because they are quickly cleaned up and don't reach waterways, he said. Work continues on three of the sites from which the Duke researchers drew samples and drinking water has not been contaminated, he said.

Kerry Sublette, a University of Tulsa chemical engineering professor and expert on oilfield wastewater spills who wasn't involved with the Duke study, said the team's methods could help other researchers establish clear links between the spills and changes in stream chemistry.

Sublette recently completed a study that found toxins from spills in streams flowing through Oklahoma's Tallgrass Prairie Preserve, which will disrupt food chains by killing insects, worms and other small animals, he said.