Colleen Wamback
The Flame Refluxer prototype is tested in the burn pan at the Joint Maritime Test Facility in Mobile, Ala., part of tests conducted between March 13-17, 2007.
Worcester Polytechnic Institute

Worcester, Mass. - Tests conducted last week of a novel technology that can greatly accelerate the combustion of crude oil floating on water demonstrated its potential to become an effective tool for minimizing the environmental impact of future oil spills (view photos in gallery).

Called the Flame Refluxer, the technology, developed by fire protection engineering researchers at Worcester Polytechnic Institute (WPI) with funding from the Bureau of Safety and Environmental Enforcement (BSEE), could make it possible to burn off spilled oil quickly while producing relatively low levels of air pollutants.

The tests of the Flame Refluxer were conducted between March 13 and March 17 by WPI and BSEE at the United States Coast Guard's Joint Maritime Test Facility on Little Sand Island, located in Mobile Bay.

WPI is the first university to work on research at the facility since it reopened in 2015. The tests involved controlled burns of oil in a specially designed test tank on the island.

"In-situ burning has been used with great success, and it is our goal to support research that makes a good method even better," said Karen Stone, oil spill response engineer at BSEE. "This research, and the results of these tests, are particularly exciting. We saw hotter fires increase the amount of oil that was consumed, what appears to be cleaner emissions, and a significant reduction in burn residue after the burn. Initially we were hopeful that the technology could capture any remaining residue after the burn, but the fires burned so efficiently there was very little to collect."

When oil is spilled in open water, burning it in place (called in-situ burning) can be an effective method for removing the oil before it can settle into the water column and cause ecological harm. In fact, the current research project is based, in part, on the experience of the 2010 Deepwater Horizon disaster, during which more than 400 controlled burns removed between 220,000 and 310,000 barrels of oil from the ocean's surface.

While that experience demonstrated the potential for burns to become an effective clean-up tool, they also made clear the limitations of current techniques. For example, open-water oil fires can be difficult to sustain, they produce smoke, and they leave behind a tar-like residue that can harm marine life. The Flame Refluxer is designed to overcome each of those issues.

According to Scott Fields of the USCG Research and Development Center "in-situ burning is already a very successful process, but we want to improve the air quality for our first responders who are engaged in oil spill cleanup."

The Flame Refluxer consists of metal coils attached to a blanket made from copper wool sandwiched between two layers of copper mesh. The blanket is designed to be placed on top of floating oil that has been collected with a boom towed by boats.

After the oil is ignited, the coils and blanket transmit heat from the flames to superheat the oil, which increases its burning rate and efficiency. As a result, the oil burns more completely. The more complete combustion produces fewer airborne emissions, and any solid residue is captured by the copper wool and kept out of the water column.

The technology was developed at WPI by a team led by Ali Rangwala, professor of fire protection engineering, as an outgrowth of research funded by the U.S. Department of the Interior aimed at assessing the feasibility of using in-situ burns to clean up oil spills in remote locations in the Arctic, where harsh weather can make it difficult to quickly mobilize clean-up equipment and crews.

When laboratory tests identified the challenges of igniting and sustaining oil fires on ice and in cold water, Rangwala and his team began exploring methods for making the oil easier to burn by transmitting heat from the flames to the oil. The Flame Refluxer is the product of that exploration.

"The technology is so simple, it has no moving parts, it's inexpensive, and it significantly enhances the burning rate of oil. The tests we conducted at this unique facility will allow us to advance the technology closer to actual deployment" said Rangwala.

Prototypes of the technology were tested in the state-of-the-art Fire Protection Engineering Laboratory at WPI. The tests at the Joint Maritime Test Facility used a larger prototype, a circular blanket nearly 1.5 meters (four feet, eight inches) across with up to 48 metal coils attached.

The blanket was immersed in a layer of crude oil floating on water.

Oil was pumped to the test apparatus to maintain the oil layer at about one centimeter (0.4 inches) throughout each 10-20 minute test burn. (Previous research has shown that crude oil burns most effectively when the oil layer that is maintained between one and four centimeters.)

During test burns conducted with and without the Flame Refluxer, the researchers measured a number of parameters, including temperatures above the oil fire and the flow rate of oil delivered to the test apparatus, in order to determine how effectively the Flame Refluxer conveyed heat from the flames to the oil (a process known as heat flux) and how it changed the oil burning rate.

An air sampling station collected emissions produced by the fire and continuously measured several combustion byproducts: carbon dioxide, carbon monoxide, nitrogen dioxide, sulfur dioxide, and particulate matter (PM2.5 and PM10). The copper blanket was weighed before and after each test to see how effectively it trapped residue from the oil fires.

While it will take time to analyze the large volume of data collected during the test burns and report official results, Rangwala said the research team made several observations that suggested that the Flame Refluxer technology performed as expected.

"Where we observed thick black smoke during a baseline test, where we burned crude oil without the blanket and coils, when the Refluxer was in use, the smoke was thinner and grey, even though more oil was being combusted. In fact, our measurements show that between four and five times as much oil was burned per minute with the Flame Refluxer in place. Finally, we observed that virtually no residue was left over after our burns with the Refluxer, an indication that it promotes more complete combustion of the oil." 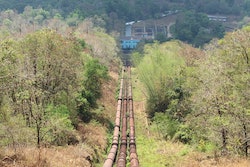 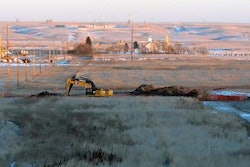