A costly emissions-cheating scandal at VW as authorities sniff around Daimler's tailpipes. 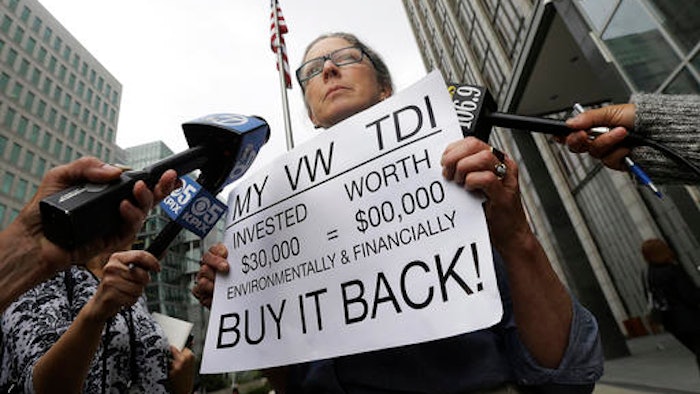 Joyce Ertel Hulbert, owner of a 2015 Volkswagen Golf TDI, holds a sign while interviewed outside of the Phillip Burton Federal Building in San Francisco, Thursday, April 21, 2016. An agreement will give consumers who bought nearly 600,000 Volkswagen vehicles rigged to cheat on emissions tests the option of having the automaker buy back the cars or fix them, a judge said Thursday.
AP Photo/Jeff Chiu

WOLFSBURG, Germany (AP) — It's been a bad week for German automakers.

Volkswagen said Friday that a diesel emissions-cheating scandal would cost it an astounding $18.2 billion just for 2015, while Daimler revealed that U.S. authorities are sniffing around its tailpipes.

Both companies saw a niche with U.S. buyers who wanted performance, gas mileage and clean air. So they marketed their diesels as alternatives to boring hybrids.

But there is growing evidence that neither was able to back up the claims without violating pollution standards. Some management experts put the blame partly on ambitious, top-down corporate structures.

VW already has admitted to programming diesel cars so they pass U.S. emissions tests in labs but spew illegal amounts of pollution on real roads. On Thursday, Daimler said the U.S. Justice Department asked the company to investigate irregularities in diesel emissions in its Mercedes brand vehicles.

Steve Berman, a Seattle attorney who has sued Daimler over Mercedes diesel pollution, said both German automakers saw a niche in the U.S. for high-performing green cars.

"They saw the opportunity," he said. "They weren't able to live up to their words but they went ahead anyway."

There also could be some complicity on the part of European governments. Karl Brauer, senior analyst for Kelley Blue Book, said governments, as well as Mercedes, VW and other automakers, have known for years that diesels could meet emissions standards in the lab, but not on real roads.

"This was the understood, if not documented, agreement between the automakers and the European governments," Brauer said. "So it was not that egregious to approach U.S. emissions with the same philosophy."

With that attitude, it's no surprise that both automakers are getting U.S. scrutiny, or that the emissions-cheating scandal could be growing.

On Friday, Germany's transport minister said five automakers agreed to recall 630,000 diesel vehicles in Europe following an investigation into emissions levels. The recalls include Mercedes, Opel and Volkswagen and its subsidiaries Audi and Porsche.

The top-down management structure at VW and Mercedes likely played a role in the emissions problems, said Sebastiaan Van Doorn, an associate professor at the Warwick Business School in England who has studied VW's corporate culture.

At VW, lower-level engineers are told what to do and not given much autonomy. As a result, in order to get things done, they don't tell their superiors what they're up to, he said.

"You get kind of a parent-child relationship where the child is not telling the parent specific things anymore if he is never allowed to make autonomous decisions," Van Doorn said.

Berman's law firm hired a company to test Daimler's Mercedes-brand diesels on real roads, finding that they spewed out too much nitrogen oxide almost all the time. Plus, the cars polluted even more when the temperature was below 50 degrees, he said. That led him to accuse Mercedes of having software called a "defeat device" that's similar to VWs.

Berman said he shared the test results with California regulators who have strong ties to the U.S. Environmental Protection Agency, and he's sure the tests triggered the Daimler inquiry.

Messages were left Friday for the EPA and the Justice Department.

Daimler said the lawsuit's claims are without merit and the investigation is unrelated. The company has repeatedly denied that it manipulates emissions tests or uses defeat devices.

Multiple tests, including one released this week by the British government, have shown that diesels from Daimler and other automakers, including Nissan, Ford and Hyundai, perform differently in lab tests than they do on the road, even without defeat devices.

Earlier this year, Dutch tests revealed that a Mercedes C-Class BlueTec diesel was emitting 40 times more nitrogen oxide on the road than in the lab.

Daimler said its exhaust treatment system is meant to be flexible "within permissible limits," and can turn off when necessary to protect the engine.

For Volkswagen, the 2015 costs of 16.2 billion euros ($18.2 billion) likely are just the beginning. On Thursday, a U.S. federal judge said VW had agreed with the government to buy back as many as 482,000 diesel cars, as well as pay to make up for the cars' pollution.

The cheating revelation last September also tarnished VW's brand image and cost it billions in lost stock value. It still faces about 500 U.S. lawsuits and the potential for billions in government fines. The company had delayed its earnings announcement, but now says it will post a whopping net loss of 5.5 billion euros for last year.

Analysts at Warburg Research think the direct cost of fines, recalls and settlements worldwide will reach 28.6 billion euros — and that's excluding any impact on sales and market share.

Volkswagen CEO Matthias Mueller said the company remains "fundamentally healthy" and that he is "convinced that Volkswagen has what it takes to overcome its challenges."

5M Diesels to Get New Software