The probe focuses on whether the automakers agreed not to compete against each other in developing and introducing technology to restrict pollution. 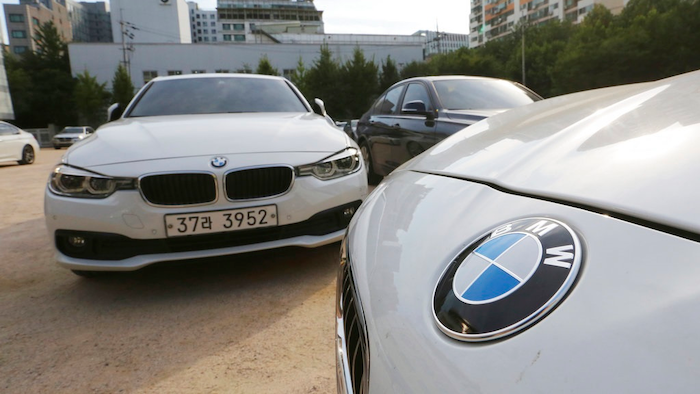 BRUSSELS (AP) — European Union regulators have opened an in-depth investigation into whether automakers BMW, Daimler and Volkswagen colluded to limit the development and roll-out of car emission control systems.

The probe focuses on whether the automakers agreed not to compete against each other in developing and introducing technology to restrict pollution from gasoline and diesel passenger cars.

"If proven, this collusion may have denied consumers the opportunity to buy less polluting cars, despite the technology being available to the manufacturers," said EU Competition Commissioner Margrethe Vestager.

The Commission said its probe was focused on diesel emission control systems involving the injection of urea solution into exhaust to remove harmful nitrogen oxides. The probe follows a report in Der Spiegel magazine last year that the automakers had agreed to limit the size of the tanks holding the urea solution.

The Commission said, however, there was no evidence the companies had colluded to develop so-called defeat devices — computer software that illegally turns off emissions controls. Volkswagen in 2015 admitted using such devices and has set aside 27.4 billion euros ($32 billion) for fines, settlements, recalls and buybacks.

The automakers said they were not able to comment on details of the case but pointed out in statements that opening a probe does not necessarily mean a violation will be found. Daimler and Volkswagen said they were cooperating with the probe; BMW said that it "has supported the EU commission in its work and will continue to do so."

Daimler noted that the probe only applied to Europe and did not involve allegations of price-fixing. BMW said it supported the Commission in its work from the start of the investigation and would continue to do so. "The presumption of innocence continues to apply until the investigations have been fully completed," Volkswagen said in a statement.

After the Volkswagen scandal broke, renewed scrutiny of diesel emissions showed that cars from other automakers also showed higher diesel emissions in everyday driving than during testing, thanks in part to regulatory loopholes that let automakers turn down the emissions controls to avoid engine damage under certain conditions. The EU subsequently tightened its testing procedures to reflect real-world driving conditions for cars being approved for sale now. Environmental groups are pushing in court actions to ban older diesel cars in German cities with high pollution levels.

The Commission probe also is looking at possible collusion over particulate filters for cars with gasoline engines.

The Commission said that it did not see a need to look into other areas of cooperation among the so-called "Circle of Five" automakers such as quality and safety testing, the speed at which convertible roofs could open and at which cruise control would work. It said anti-trust rules leave room for technical cooperation aimed at improving product quality.

Anti-trust fines can be steep. In 2016 and 2017 the Commission imposed a fine of 3.8 billion euros after it found that six truck makers had colluded on pricing, the timing of introduction of emissions technologies and the passing on of costs for emissions compliance to customers. Truck maker MAN, part of Volkswagen, was not fined because it blew the whistle on the cartel. The others were Volvo/Renault, Daimler, Iveco, DAF and Scania, also owned by Volkswagen.